The Live TV cable channels on my ONN TV quit working, display a blank screen.  This TV is about 8 months old and had been working fine and I'm pretty sure the problem started after a software upgrade.

I called ONN TV support and it took me several calls to convince them it wasn't a cable problem even though I told them I had swapped this TV with a working non-Roku TV and the problem stayed with the ONN.  I had to call my cable company and have them say it wasn't their problem before they would accept it was a problem with the TV.  Eventually after having me do another factory reset (I had already done 5) and scanning for channels again (takes 20 minutes and I had already done 10) they said they would start a RMA claim.  I need to take 3 pictures of the front and back of the TV and send them a copy of the receipt and they will process the RMA.

I don't want or need an RMA as I'm guessing a replacement with current software won't work with this cable system either.  I see that this is similar to https://community.roku.com/t5/Discussions/Live-TV-not-working-on-Roku-TV/m-p/638751#M14191 Dec. 2020.

Is there a way to do a factory reset and have it not update when you connect to the internet?  Or get somebody to actually look into what about the update broke it? 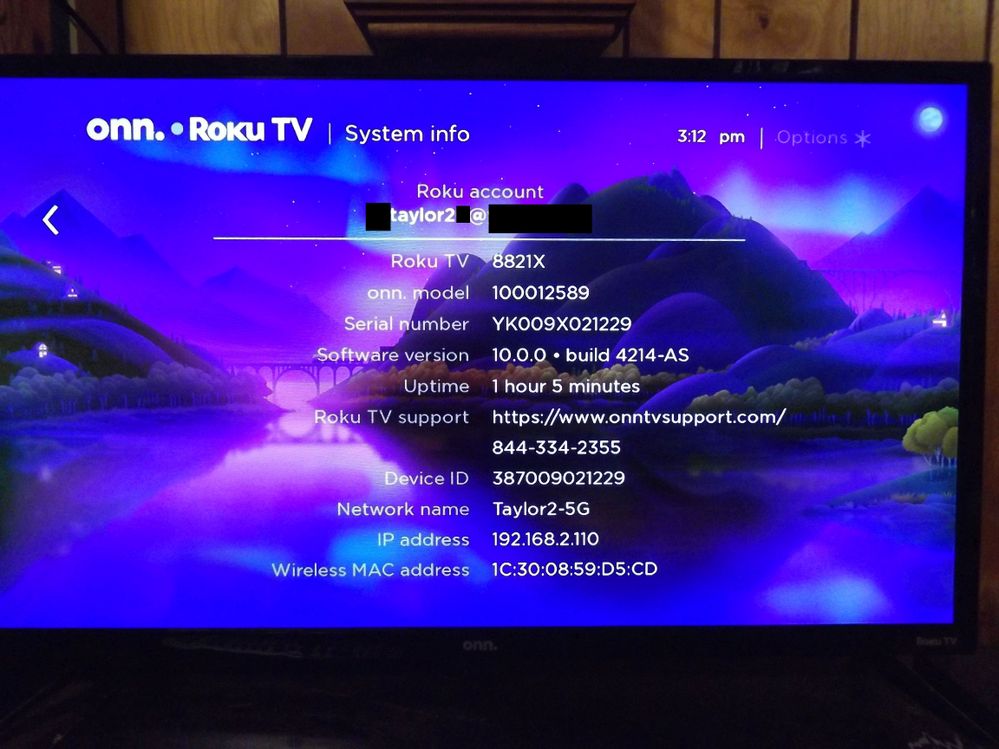 After factory resetting your TV, have you tried connecting and updating your TV, then scanning for channels for Live TV?

Yes, several times.  The channels are detected, but they just have a blank screen.  If I do a factory reset and scan for channels before I connect and update they are found and work, but as soon as I connect and it auto updates they quit working and just display a black screen.

This had worked for months and it appears an update broke it considering it will still work after a factory reset up until it updates.  But I haven't been able to get anyone to understand that .  I'm not expecting a good result because ONN just seems to want to RMA it and I'm skeptical a replacement of the same TV won't have the same problem.  I just got an email that the pictures I sent of the back of the unit were too blurry to clearly see the ONN label and serial number and I need to redo them for the RMA to continue so I need to disconnect it and move it to a better location to get them better pictures.  I would have thought the picture I sent them of the about screen would have had everything they needed, but will get them more pictures.

I don't really want a replacement, all I want is to get the old working software, or have a way to keep it from updating from the factory reset.

ONN support offered to replace the TV but I would have to obtain packing and be without the TV until they got it and sent the replacement.  I declined as I believe it was broken by a software update and that there is nothing wrong with the TV itself.

They then sent me a link to download software and do a USB update.  I downloaded the software, did a factory reset and "can't connect to the internet" update.  The TV checked the file and said it was older than what was currently installed and that downgrades were not supported and refused to load it.

At this point I'm giving up trying to get it fixed.  There are probably not enough people with this TV still on an old analog NTSC cable box to get enough complaints to get it fixed.

We would be more than happy to look further into this issue for you.

Would you mind send us a picture of the error pop up on your TV screen?

Can you please provide us the following information:
-Roku device model, serial number, device ID, and software OS/version (these can all be found in Settings > System > About)
-does this issue occur on a specific channel? if so, what channel and what version/build is the channel (this can be found be selecting the channel on the Home screen and pressing the * button)
-tracker ID when this issue occurs (when you see this issue occur, press the Home button 5 times, followed by the Back button 5 times)


All the best,
Irene

To update this old problem.  After a recent upgrade all of my Live TV cable channels started working again.

I had given up using cable on this ONN TV after a upgrade made my cable channels quit working, but I didn't remove them from the channel lineup.  Today I was scrolling through Live TV and noticed my cable channels were working again.  I'm guessing the latest update fixed them.  I took over a year, but I'm glad to have them working again.

That's great that it started working again. I'm sure we'll never know, but would be curious what exactly got broken in that problematic software update, and whether everyone tuning into Clear QAM was affected, or only those on specific cable systems.

Clear QAM is rare these days in the US, so there might not have been many complaints even if it was broken everywhere. Only small, independent cable operators still offer it. With the FCC no longer requiring this, major system operators like Comcast, Spectrum, and Cox now scramble everything, requiring a box on every television (so they can turn off cancelled & non-paying accounts without having to physically disconnect the drop), and some also implement Switched Digital Video as a bandwidth-saving strategy, where less popular channels are placed on a particular neighborhood's coax feed only when someone's actually watching them... or just sent as streaming video over the DOCSIS data carriers.

Does your Roku TV show correct program guide information for the direct-tuned cable channels? Lack of guide data is often a drawback with direct Clear QAM reception, since it's often sent to the cable boxes on a proprietary side channel that customer equipment can't understand, but I think Roku (like Tivo) gets its program guide over the Internet, so maybe it "just works" regardless?

I doubt there were many complaints as I'm sure there aren't many people on old systems like this.  It's an Entone system supplied by the local independent phone company (Consolidated Communications) over the copper phone line.  I'm not sure they even offer the system to new customers as their web site only offers internet and phone service and has links to streaming tv providers for video.  They (Consolidated) are installing fiber in this area and I'm pretty sure as soon as that is installed we will be migrated from pots telephone and Entone cable to internet phone and a streaming tv service.

The Roku TV shows the cable program guide OK because with this system the cable remotes are RF to the cable box and the TV is connected via coax and just receiving a stream on a channel and the box is suppling the guide.  The system supplies one HD or SD stream over HDMI at the Entone box and three SD streams over 3 coax channels (10, 23, 39 with 10 being the same as the HDMI output).   We don't watch cable on that TV much, but it's nice to have it working again.