I used to develop with Eclipse + Putty

Today I use Atom + Purplebug and it is way better now, thanks for your work!
0 Kudos
Reply

"RokuMarkn" wrote:
Ah, ok, I knew cmd didn't support ANSI but I didn't realize that telnet did.  It seems insane to require the ANSI logic to be in every program that uses it rather than having it in the terminal.

Mark -
now that we figured out that Windows telnet not supporting ANSI/VT100 was a misunderstanding -
and if we could put aside personal distaste for Windows -
can we get a serious consideration of using the linenoise library for the console, please?

I honestly tried rlwrap in OSX and it is a dud for Roku console (unless you like being unable to access telnet options, closing your telnet sessions with "kill" from another terminal and ^C occasionally not working).

As a reminder, linenoise is small, easy to integrate and permissively licensed. (unlike readline)
0 Kudos
Reply

Does anyone here use a Mac for Roku development?

I'm working on a JavaScript version of my Roku debugger interface, PurpleBug (the new one is called VioletBug), which should have more cross-platform support that PurpleBug, which only runs on Windows.

I'm able to test VioletBug on Windows and linux. However, I don't have a Mac, so I'm unable to test the macOS build. If anyone has a Mac and wouldn't mind spending a few moments to see whether VioletBug actually installs and runs on their Mac, then I'd appreciate it. All you need to do is download and install this zip file and see what happens: https://github.com/belltown/violetbug/releases/download/v0.0.1/violetbug-mac.zip

Testing on 10.9.5
Have to authorize in Security pref pane (not signed)
Finds my 4 rokus  - 3 Roku3 (4200)'s with serial#, roku2XS(3100) with friendlyname
All menus fonts, colors, shortcuts drop down fine.
No "about VioletBug"
Selected my dev roku, changed fonts, size, color fore back
Multiple tabs - nice
So overall - it blows the terminal away. I 'll be switching immediately until it turns the oven on in the kitchen or something - thanks.

"squirreltown" wrote:
Testing on 10.9.5
Have to authorize in Security pref pane (not signed)
Finds my 4 rokus  - 3 Roku3 (4200)'s with serial#, roku2XS(3100) with friendlyname
All menus fonts, colors, shortcuts drop down fine.
No "about VioletBug"
Selected my dev roku, changed fonts, size, color fore back
Multiple tabs - nice
So overall - it blows the terminal away. I 'll be switching immediately until it turns the oven on in the kitchen or something - thanks.

Thanks a bunch for trying it out. When you say no "about VioletBug", are you referring to the left-most menu item, or the right-most menu item (Help > About VioletBug)? The one under Help should work. The other one on the left I wasn't sure about because that's on a macOS specific menu item that I wasn't able to test without an actual Mac. The same is true of the other things under that menu-item (Services, Hide, Hide Others, and Show All); they're all macOS-specific, so I wasn't sure if they'd work, but I don't believe they're crucial to the functioning of the program.

As far as the device discovery goes, you mentioned your Roku3's with serial number, and the Roku2XS with friendly name -- does that mean it didn't detect the friendly name, model number/name, etc, for the Roku 3's?

The program isn't (and won't be) signed; you just have to trust me -- or build it from source. And the functionality to turn on the oven has been disabled until April 1.

OK, now the "About VioletBug' in the VioletBug menu works, 0.0.1 (0.0.1)
I've noticed that the focus comes and goes, best way to describe it, if you switch to another app and  back, it's more likely to lose focus, meaning no input works, but cycling around brings it back. It certainly is not hanging in any way. Hardware here is 2010 MacPro 12core.
It finds all serial numbers & names. The 2XS must have a name assigned to it the others don't.
I'Ve adjusted the colors I want. Real nice.
Kinetics Screensavers
0 Kudos
Reply

I love PurpleBug, is VioletBug just to be cross-platform, or are there other changes/improvements/benefits?
0 Kudos
Reply

The main benefits of VioletBug are that it's cross-platform (not an issue if you're only using Windows, but certainly of help to linux and Mac developers), and it's open source (so you can theoretically change the code if you don't like the way it does something, or you want to add new features), and it's prettier (a matter of opinion, of course -- see images below). There's really nothing I can think of that VioletBug does that PurpleBug doesn't do on Windows, except for the ability to zoom in and zoom out to change the size of the entire window contents, like you can on a web page; PurpleBug only lets you change the font size on a connection window.

If you want to try out the Windows version, just download and run the Windows installer: https://github.com/belltown/violetbug/releases/download/v0.0.1/VioletBug.Setup.0.0.1.exe

Being cross-platform, developed using web technologies, does come with a few restrictions, however. The main limitation is that as the size of the window buffer grows, performance takes a hit. For now, I've placed a limit of 10,000 lines of output, adjustable by changing a value in a config file. If you really need a million lines of output in a window buffer, then stick with PurpleBug. There also aren't as many fonts automatically available, since there's no cross-platform API that gives native access to a system's font registry, although the 9 monospace fonts I've included so far should be sufficient for most people; others can be added on request. Also, PurpleBug does a better job handling the docking/undocking of "floating tabs". You can float a tab into its own separate window using VioletBug, but each time a tab is floated or un-floated, the tab's connection data is cleared out and the connection re-established -- probably not really an issue for most users though.

My main motivation for coming up with a cross-platform solution was that I've been becoming a Windows-hater of late, and I've been endeavoring to do all my non-Windows-specific development on a non-Windows OS (linux for now, as I don't own a Mac yet). Plus, it was an opportunity to learn some new stuff. If other people can get some use out of it then great. 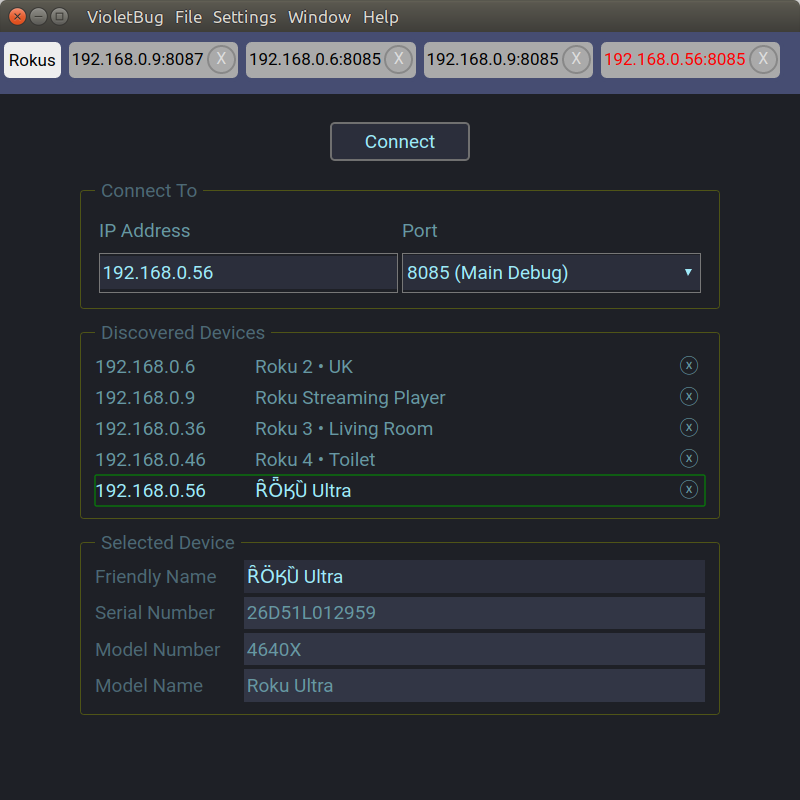 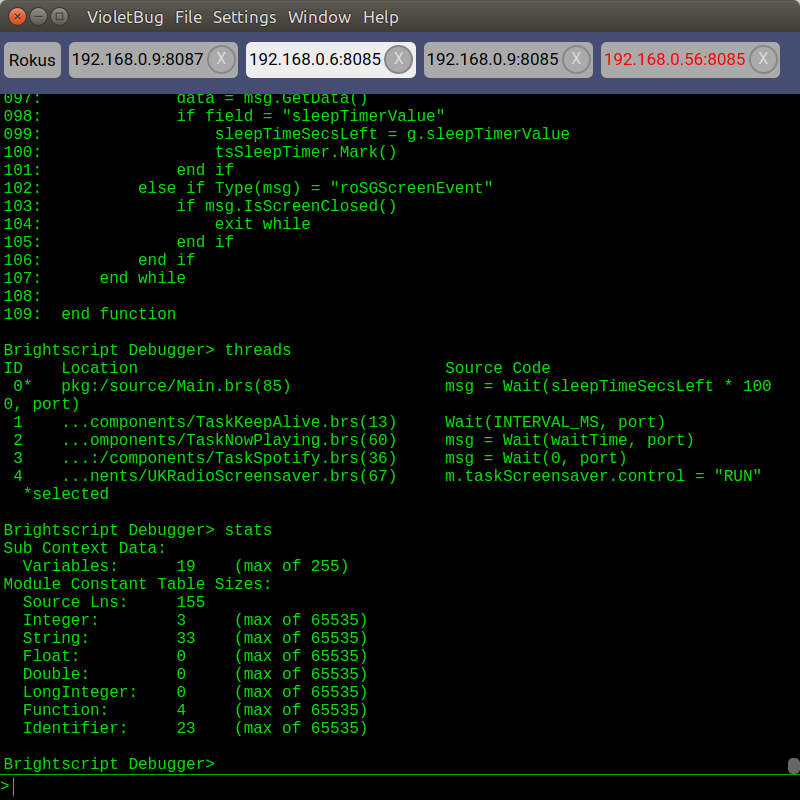 The discovery thing is nice. I sleep the Mac at night so I have to re-connect each morning, much easier. Using the Courier New font, easy to read.
Kinetics Screensavers
0 Kudos
Reply

"belltown" wrote:
Does anyone here use a Mac for Roku development?

- it does not let me enter a host name - it should,
- it does not let me paste IP - it should
- also i should be able to enter port# that's unlisted
- cmd-C / cmd-V (copy and paste) shortcuts don't work - contrary to what right-click hints say
- when clicking on the console screen, would be nice keyboard still to go to the entry line (instead of having to click on the thin line first)
- cmd-F should do search in the console text (as is in Terminal)

It's rather massive at 100 MB for a telnet client, no? If going that (browser engine) route, why don't you just plug into VSC's console API? And for the same price we get an IDE too