I think buying a Roku tv is actually a service to society. If it weren't for us, they might get into the self-driving vehicle market. ("Watch out! Roku just pushed a new update!").

"People are often amazed at how much we’ve done with the number of engineers we’ve got." (Roku CEO Anthony Wood, Austin Statesman, Oct 4, 2019). "Amazed" is one way of putting it.
3 Kudos
Reply

Either a sign of Roku's not getting it (tone deafness), or callous uncaring. Today, Roku changed my home screen theme to a broken antenna tv: 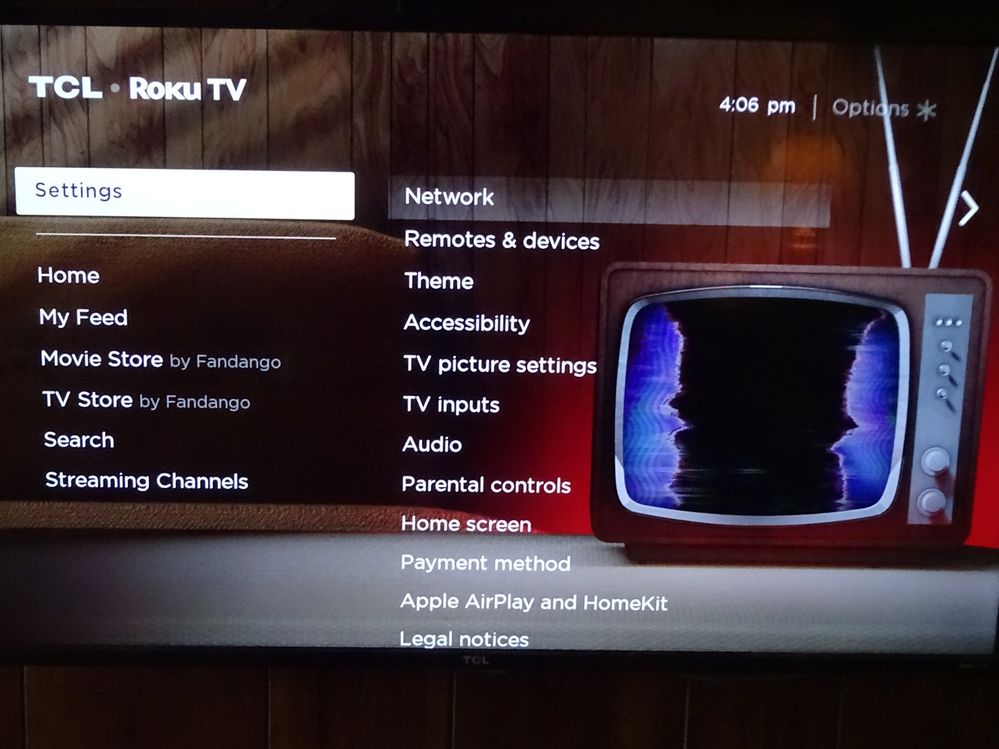 Doesn't that speak volumes? Roku customers are suffering, and Roku's almost proud? How could they be that tone deaf? I seriously think they have contempt for their customers.

"People are often amazed at how much we’ve done with the number of engineers we’ve got." (Roku CEO Anthony Wood, Austin Statesman, Oct 4, 2019). "Amazed" is one way of putting it.
4 Kudos
Reply

Yes.  I have both a TCl and a Hisense. Brand doesn't matter.  Neither one has the ability to set favorites.  When Antenna TV changed to Live TV the ability set favorites disappeared from the settings.  Now i have almost 1000 channels, which could be great, but who wants to scroll up & down arrows through them.  This is ridiculous.  The only way around this is to use the roku app on my phone, hit the microphone button, & tell it which channel i want to watch.  Better than arrow scrolling through a million channels, but also cumbersome that I can't just use the TV remote to do what it is designed for.  Who's idea was this stupid update?1


The only way around this is to use the roku app on my phone, hit the microphone button, & tell it which channel i want to watch.  Better than arrow scrolling through a million channels, but also cumbersome that I can't just use the TV remote to do what it is designed for.  Who's idea was this stupid update?

What's ironic (or revealing) is that Roku's CEO has repeatedly said Roku's goal is simplicity. When you hear that as a prospective consumer, or investor you think of Apple-like elegance. A zen experience with your tv.

When you own a Roku tv you realize what he really means is: simple for Roku. No testing of updates before release. Disregard for older models (which would make testing harder). Roku has time to remove Favorites and continuous channel changing, but no time to fix longstanding problems.

Look at the infinite recovery loop. That's existed for a long time. The "can't connect" (mac addr all zeroes) problem where people have to carry their tv down the street with portable generator trying to find an open wifi to use just use their tv. That has existed at least for many months. I've seen a couple of posts saying it's been YEARS.

“When I wake up in the morning I don’t think about our competitors. I’m focused on how can we make our experience better, how can we allow our partners to make more money; how can we get scale on our platform.” (Anthony Wood, Our Goal Is To Power Every TV In The World, CNBC Sep 28, 2017).

You have to wonder if he really believes his blarney, or is just immune from any conscience. The theme being set to a broken tv, as if they're proud of their accomplishments makes me think it's the latter.

There's other quotes like that, where he runs down the other tv/streaming innovators, that they don't think out of the box like Team Roku does. All I can say is: I wonder how much worse it would be if he had mediocre vision like he accuses everyone else of. (Thank goodness Roku didn't get into self-driving cars instead of harmless tvs.).

I'm confident this is going to come back to bite Roku. They had an stock IPO, and now the stock as at stratospheric prices. I've seen this before. It goes to the company's ego, and they think they can do no wrong. It's a bad mirror that can change in an instant. There's absolutely no way a company can operate the way Roku does without developing a very bad reputation (if not regulatory intervention). The leadership seems oblivious or contemptuous of this reality. Tick tock... With Android on tvs now (which the CEO previously said was what Roku wanted to be), tick tock.

"People are often amazed at how much we’ve done with the number of engineers we’ve got." (Roku CEO Anthony Wood, Austin Statesman, Oct 4, 2019). "Amazed" is one way of putting it.
1 Kudo
Reply

When a customer selects 'Live TV'...     'Favorites' and/or most recently viewed channels should be right there without the ridiculous requirement of more button presses.  Bring back Favorites on the main Live TV view.

When are my favorite channels going to be back and this garbage gone?

You keep saying Favorites has been added to Recent Channels - but there is NO recent channels for cable TV. PLEASE BRING BACK "FAVORITES"! The current mode of operation - scrolling through a list of 100+ channels is so hard on the 70 year old!

Bad news: The no favorites list is maddening. The option to switch to “recent channels” doesn’t work, either. Poor form, ROKU!

This latest update is worthless. If you really want to upgrade the user experience you should allow the user to set their own favorites or channel order. Samsung does this and I wish I had bought a Samsung for my living room instead of the TCL Roku. I doubt that I will purchase another Roku smart TV.

Agree, this is the way to go, Return the favorites or better yet add a favorites list.