Once again -paused for 15-20 minutes on you-tube tv.  When I tried resuming the sound is gone.  Need to restart the system to fix.

The appropriate Roku team is is currently investigating the issue. Once more information is available, I'll be sure to update this Community thread.

I have a brand-new Ultra with 11.5 FW. It’s directly connected to my TV (no sound bar). I paused YouTubeTV and resumed it about 15 minutes later. There was no sound on YouTubeTV. No sound on Prime. However, Fox Nation had sound. The responsiveness was sluggish as if the CPU was burdened. When I tried Paramount+, the Ultra crashed and rebooted on its own, after which everything worked.

I also tried a “workaround” suggested in an earlier thread (for 11.0 FW) – I set the audio to Passthrough and the audio format to Dolby (and also to DTS). None of this helped.

It sure seems like the Ultra’s 11.5 FW crashes occasionally when resuming from paused YouTubeTV.

I'm new to Roku and also bought 2 more Ultras, but all 3 may go back to Amazon.

Loss of Audio after the pausing of a program I was watching.

Every once in a while, my audio for the program I had paused will not work. The sounds from my Roku are fine, it's just no audio from the program after unpausing it. I have to restart my ultra or unplug it to get the audio back.

Anytime you watch something on YouTubeTV and pause it for let's say 5 minutes and return. There is no volume. I actually have to reboot the Roku, exiting YouTubeTV does not fix the issue. While trying to play with no volume, I have pressed the asterisk and changed the volume settings to see if it would work and it won't.

This has been happening for just a few weeks.

Re: YouTubeTV Audio goes out after long pause

and same as above

Thanks for posting in the Roku Community!

We would be more than happy to look further into this issue but will need more details. Can you please provide us with the following information:

Once we have this information, we will be able to pass it along to the appropriate Roku team to investigate further.

This happens on any channel while watching my YouTube TV app. I'm pretty sure it also happens with Netflix as well. 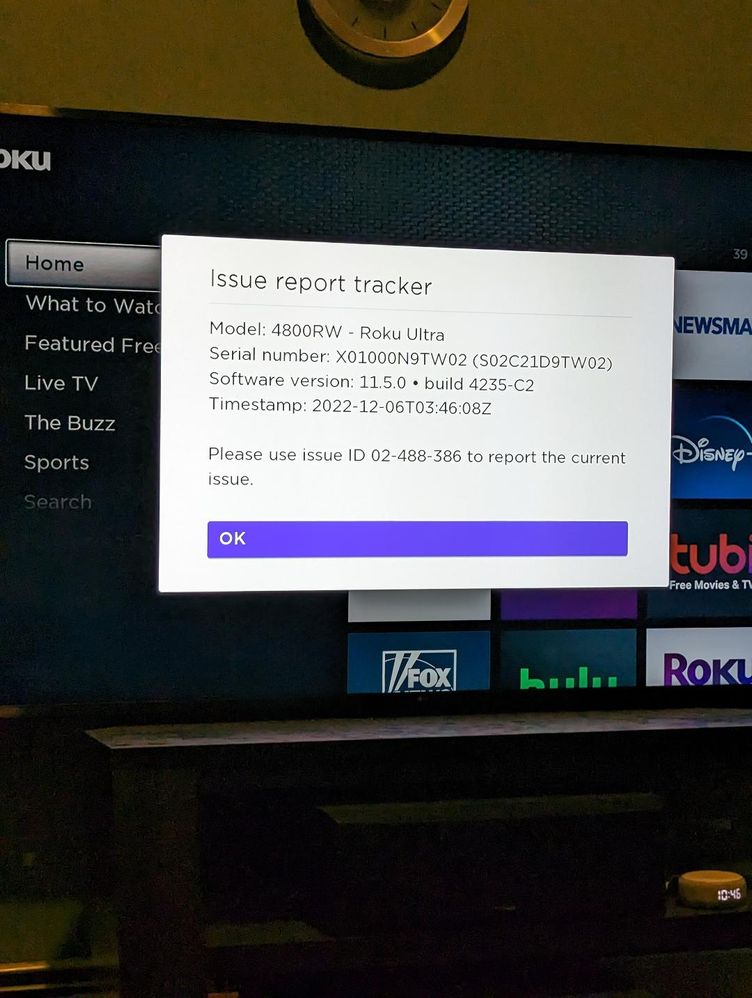 Thanks for providing the information needed.

We'll send this over to the Roku team for investigation. We'll get back to you once an update is available I'll be sure to let the Community know.

We're hoping to get everything sorted out soon and appreciate you bearing with us in the meantime.

Possable fix... I have the same problem... long pause on yttv and no sound.

I've tried all the listed fixes with no luck.    What has seemed to work is to turn the screensaver off.

I had it off for a week or 2 and no problems.   I turned it back on and no sound problem returned.

I was using the baby animals screensaver if that makes any difference.