Help & troubleshooting for channels on your Roku device, including adding/removing channels, logging in to, authenticating, or activating a channel, channel-specific playback issues, assistance contacting channel publishers to report issues, and adjusting channel-specific settings.
Turn on suggestions
Auto-suggest helps you quickly narrow down your search results by suggesting possible matches as you type.
Showing results for
Show  only  | Search instead for
Did you mean:
Options
wsanders1
Level 8

Check the forums and make sure Amazon is not throttling Chromecast as well. The comments in this search result are a year old, but, as I said previously, considering Amazon's penchant for evil, they may have engineered their service to work best with their own apps and Firestick. Although you can cast from their apps to your TV; shouldn't be a problem at HD if your Wifi is in good shape. 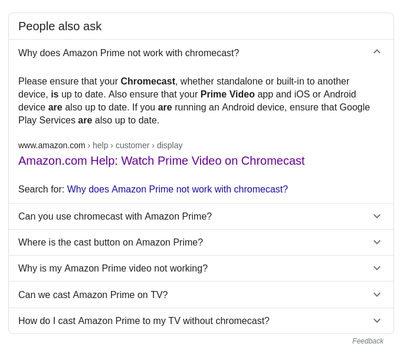 Went with the NVIDIA SHIELD.  Decided I prefer not to need to use my phone to watch on something other than my phone.  I have not seen anything about problems streaming Amazon on this device.  Doesn't mean they don't exist, but I can go on only what I read.

I read one account of someone beginning to experience this problem early in 2020 on a Firestick, after not having the problem for the year.  If it's a problem on a Firestick, where would it not be a problem?  Fire TV is an Android TV device, as is what I'm getting.  Will try to remember to post my results here in this thread.

Re: Amazon Prime buffering (Fixed it)

Sorry.. I have a 1080p set.  Prime Video is the only app that doesn’t work.   I have an old v1 Chromecast that plays prime fine.

Roku though needs to get its act together.  Fix Prime and sign an HBO max deal.  Who ever is running this company is looking foolish.  In the middle of a pandemic when everyone watches more TV, let’s just make it real difficult to watch anything on 2 of the largest sources of content.   Roku’s competition cost $35 bucks, multiple products from different vendors, just pick one, and all problems are solved.

When Apple, Google and Amazon were all fighting, keeping their content off competitors gear, I chose Roku to avoid that **bleep**.  Now that AGA have made friends with each other, Roku is starting to look a little broken

It is not the network that is the problem, it is not the Roku hardware, it is the App.  Horrible experience most nights, then I switch to the Chromecast and everything looks good.

Re: Amazon Prime buffering (Fixed it)

IANAL, but perhaps Roku would have a legal recourse against Amazon for problems with their streaming app on only the Roku platform.  Antitrust?  I don't know.  It's worth a look.  Between Amazon and Roku, only Amazon might have a reason, at least one I am aware of, for causing these problems deliberately, i.e. herd people off Roku onto other devices like (Amazon) Fire.  Roku has no inherent interest in which streaming services people use on their devices.  They just sell the devices, not the services.  Amazon sells both.

If the app were open source, I would at least try to fix the problem.  I know a lot more about static images than video streaming, but I learn quickly.  Alas, it is not to be, particularly if they don't want it fixed.

Boy, I am so upset over this, and reading all the posts that are exactly what seems to be happening to me. I have Roku Express and just lately I noticed this while watching a Smithsonian channel program, which I subscribed to thru Amazon. It's really annoying, worse than having bad antenna reception! I don't know who's to blame but agree that it needs fixed! This is not free and it should work correctly! I'll drop Amazon if I have to, although lots of content I like. Won't keep paying for something I can't watch. Every other channel is perfect. Tried suggested fixes, none worked. They better get their act together!

The verdict on NVIDIA SHIELD is in.  No pauses, and no out-of-sync audio watching Amazon Prime.

I really would have preferred to change my streaming service than my streaming device, but I just recently got a year Amazon Prime membership, which, by the way, I use for other things.  Amazon certainly does not have the best streaming service for movies and TV.  They have some pretty decent original content, but so do others.

The bottom line is

What is this about NVIDIA Shield?  I can't find the original comment if there is one.

The NVIDIA SHIELD is another streaming device that the previous commenter apparently replaced his/her Roku with.  I think their comment suggests the only solution so far to this annoying problem is  to replace our Roku devices with a different device proven to work well with Prime Video.  Apparently the NVIDIA SHIELD worked flawlessly for them.

I have a Roku Premiere Plus 4K which is connected to my router via Ethernet cable. I have the same problem with Amazon Prime buffering, while other streaming services work fine. My internet service is 30Mbps, and router activity shows nowhere near the maximum capacity while the buffering issue is occurring. Also, if it I switch over to watching the same show on the Amazon Video app on iPad, the buffering problem disappears. All of this points to the Amazon Roku app as being the source of the problem.

Lowering the resolution is not an acceptable solution, because I paid good money for 4K devices and 4K service.

It's not doing Roku any good to pass the buck on this issue, even if it's not their fault, because I will switch to an Android box (e.g. Nvidia Shield) or Apple TV if this is not fixed soon. And if I make that switch, then I'm never going back to Roku.

Criterion Channel (a small art-house movie streaming service) has done a better job of maintaining their app than the mighty Amazon. When Criterion first launched in 2019, their Roku app had some serious problems, but they worked diligently to fix those problems, and their app has been issue-free ever since. Shame on Amazon.

I am having and have been having this exact same issue with my Roku Premiere for a while now.  Like the others in this thread I do not have any buffering problems with any other app.  Netflix, Hulu, Disney+, et al have never given me trouble.  I have Comcast for my internet with 300Mbps speed.