After updating to the latest 9.2.0 build 4100-46 software, playing music on the Roku Media Player will cause the entire Roku to lock up and reboot within an hour. I have not yet measured exact times, but it happens consistently and always within one hour.

Playing music as MP3 files via Twonky. I play music via the media player every day. It has always performed extremely well and stable until the new 9.2.0 build 4100-46 update.

I do notice that the Roku Media Player software seems to be "slower" since the 9.2.0 update. For example, loading playlists (via Audio -> Twonky -> Music -> Playlists) with several hundred entries would show a "loading" screen that lasted for less than one second before the update. Since the update, it now takes several seconds to load the same playlist.

Some more info: Roku Media Player was NOT locking up and rebooting when it was playing UNTAGGED .m4a files. It would lock up and reboot when playing TAGGED .mp3 files.

This seems to have solved the freezing / reboot problem.

However I just now noticed that the "Repeat Play" options have been REMOVED from the Roku Media Player after the latest 9.2.0 build 4100-46 software update. There is now no way to repeat play on playlists or folders. So this update still SERIOUSLY ***BREAKS*** Roku Media Player for me, which is a channel I use every single day.

However I just now noticed that the "Repeat Play" options have been REMOVED from the Roku Media Player after the latest 9.2.0 build 4100-46 software update. There is now no way to repeat play on playlists or folders. So this update still SERIOUSLY ***BREAKS*** Roku Media Player for me, which is a channel I use every single day.

RMP still has the Repeat All function. You will find it after selecting a video/song, but before you begin playback. Hit the * button and you find the Repeat and Shuffle options. 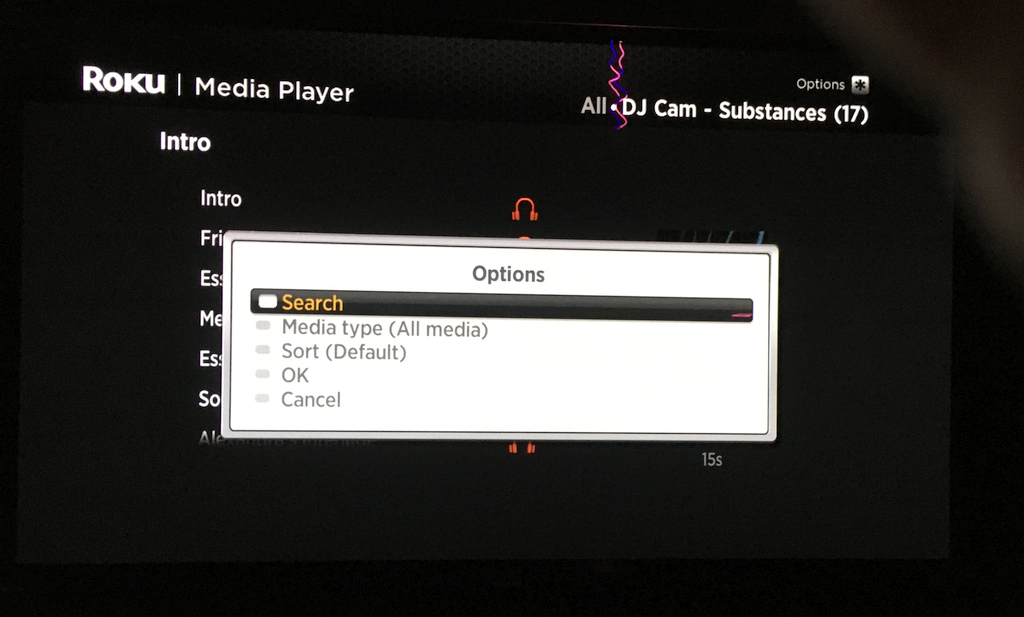 Since no one seems to be able to confirm whether or not this is happening to them, I tried sending a support request. I selected the options and typed everything out. When I got to the last step, at the url https://support.roku.com/contactus/review-and-submit, when I click the "Submit Support Request" button, nothing happens. So I can't submit a support request. Tried two different web browsers with no adblocks and same result.

Why are all of these issues happening to me suddenly? How could I lose all of this functionality with Roku Media Player, and also lose the ability to send a support request? What could make something like this happen to me?

I have the Roku customer support e-mail address so I tried contacting that. This sends me an automated reply to go to support.roku.com. I tried sending the support request again using an iPad. Again, the "Submit Support Request" button does nothing.

This has turned into an absolute nightmare for me.

Tanner D. sent me a private message offering to try rolling my Roku software back to version 9.1. I tried replying to him, and I get "You have reached the limit for number of private messages that you can send for now. Please try again later."

And now the freezing and rebooting issue is back.

Yes, it does appear that they've moved it. All I'm saying is that it's still there, just in a different location. Select something to play, but before you click Play, hit the * button and you'll have the Shuffle and Repeat All options. This is RMP version 4.2.1655. I am a beta tester for RMP, but this is the public version I'm looking at. It doesn't really matter what Roku OS version you're on, as far as I know, as long as you're on at least 9.0.

That IS the menu that comes up before clicking play.

I did end up finding the "Repeat", "Shuffle", and "Screensaver" option for audio. I believe that the latest Roku software update has added the universal "Options" screen to audio playback, with "Volume" and "Accessibility" options from the left fly-out panel when the "*" button is pressed. Pressing the * button in the past brought up the "Repeat", "Shuffle", and "Screensaver" center white pop-up menu. Now, to get this pop-up, you have to press the * button IMMEDIATELY after playback starts, I think within something like less than a second.

So, you DO have to hit play, but then you have to IMMEDIATELY hit the * button within LESS THAN A SECOND after hitting play.

Up/down list scrolling and left/right audio seeking have still stopped working. That's not THAT big of a deal, but it's annoying to have lost that functionality.

So now, for me, the big major problem is the freezing and rebooting on mp3 playback. It's random, but always within an hour. It's now very consistent. Removing, rebooting, and re-adding the Roku Media Player channel now has no effect on this. So the player is basically crippled for .mp3 playback.