I keep getting the wrong model soundbar -- am I crazy?!

I've bought now 3 Roku Smart Soundbars... Twice from Best Buy and once from Amazon. And everytime I think I'm buying the regular model (9101r) but when I open the box an check the model on the actual unit, I keep getting the 'onn.' Walmart model (9101x). Am crazy? What is going on with Roku? Did they just send a bad batch of units to my region?

The box shows the correct model but unit itself does not. I even thought maybe it was just a missprint but when I plugged in the Soundbar and went through the set-up, the default name the device gets is 'onn. Roku Smart Soundbar' so clearly this is the lesser-quality version soundbar. Apart from also not sound so great, etc. 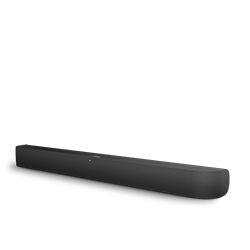 I own both models of Roku soundbar, Roku brand has this when you go to settings> system> about>

The Walmart Onn roku soundbar has this in the about:

The R & X do not designate Roku over Onn soundbars. The un-open box with Soundbar and accessories will have R in the model number which stands for Retail. Nowadays the Roku by itself only has the x suffix. So the Roku branded Soundbar is the 9101r or x. The Onn is 9100R or x.

If you're found true Onn soundbars in the Roku box it was probably switched out during a return. Any of the two you purchased come with Wifi Voice remote? The Onn only comes with IR remote.

Sorry about the late reply, I just ran across your post.

The 9100x is a stripped down model available from Walmart under its Onn label, with a peak power of 40 watts. It comes with an infrared direct-line-of site remote.

The 9101r is available from Roku directly as well as Best Buy. It has a peak power rating of 60 watts. It comes with a point-anywhere voice remote that allows you to do voice searches. It is also compatible with Google Assistant and Amazon Alexa voice assistants.

Than why did the soundbar got the "onn. Roku Smart Soundbar" as its default name when I added it to my Roku account?

I gave up and just ordered another brand soundbar.