Help with Roku remotes and accessories, including pairing a remote, setting up TV power & volume control, using voice commands, power adapters, cables, headphones, and wireless speaker accessories.
Turn on suggestions
Auto-suggest helps you quickly narrow down your search results by suggesting possible matches as you type.
Showing results for
Show  only  | Search instead for
Did you mean:
Options

I naively thought all Roku remote controls basically operated the same way.  I see now that some operated via IR signal transmission, and others by Wi-Fi Direct, and somehow, both.  (I say both because one I have seems to be able to use/does use both types [???]... keep reading.)

Here's a link to a Wikipedia reference someone here provided me in an earlier post/discussion:
https://en.wikipedia.org/wiki/Roku#Feature_comparison

The charts have a column for "Remote" and provide info for each model.  The information about the remote type/transmission mode is listed for each mode in this column, e.g., IR, Wi-Fi Direct, Voice Search.  That is, until you get to the last section, "Sixth generation," which lists models introduced during October 2017.  Now, look at the info in the "Remote" column...!  Someone updating this info has provided only "Yes" for each model....   :roll:

Can someone provide simple details about the remotes for these 2017 models?  Here, I'll type out the models for you to copy & paste in your own reply to make it easier to answer:

The fundamental problem with that chart on Wikipedia is that it doesn't so much detail which remote comes with the device, as one might expect it to show, but instead shows what method of remote control the device accepts.

For example, the Premiere+ 4630 can accept either an IR or RF (WiFi) signal, however it comes with an RF remote that has no IR capability.

The Premiere 4620 can also accept either IR or RF (WiFi) signal, however it comes with a basic IR remote that has no RF capability.

Both of those remotes will work with either device (I have one of each and have tested both remotes on them). Of course the IR works without having to do any pairing, since it simply blasts out a one-way beam to the IR receiver on either device, whereas you have to pair the RF remote to the device before you can use it.

All Streaming Sticks (3500, 3600, 3800, 3810) are RF only, as there is no IR receiver on the devices. Those stick RF remotes are not interchangeable with the RF remotes from the non-stick devices (Premiere, Premiere+, Ultra, etc.), however. So you cannot use a Stick's remote with an Ultra, nor can you use the Ultra's remote with a Stick.
0 Kudos
Reply

From what I have been told every Roku except the Streaming Sticks can use an IR remote. Every IR learning remote control should work like models from Sideclick, Harmony, URC and one that we like for the backlit keys and low cost the Inteset 4 in 1 should all work fine. Having one remote that can learn to control everything is real handy. Wish the Sticks had a jack for a IR extender so they too could be controlled with an aftermarket remote. Nice to see that Roku started adding buttons to control your TV set. They are moving in the right direction. Now if they just let it learn some more commands and add some backlit buttons there would be no need to swap one out with something else. 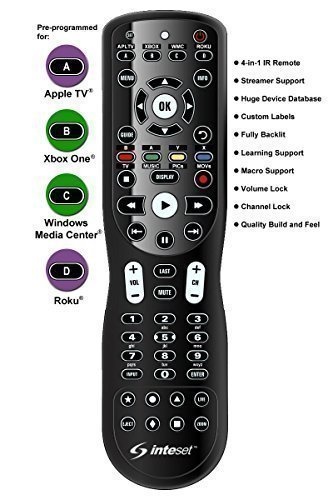 Found this photo and all these universal remotes should work to control any IR enabled Roku. Which is all except for the Sticks.
a. Inteset b. Sideclick c. Harmony d. Harmony e. URC Automator

Thanks for these informative posts.  I'm slowly adapting my four TVs for eventual cord cutting from Spectrum; I'm a noob as well as a procrastinator, so it's going slowly, but that's OK.  BTW, I picked up a really cheap programmable remote control in Walmart just to see how it works/if it will work.  (I really don't want to spend $60 per remote x 4.)  It's an RCA 4-device universal remote that cost $8.  The info provided on the back of the remote's packaging says it will support Roku, so I'll give it a try.
0 Kudos
Reply

@Premiere+4630, you make a great point.  I only want to bring some clarity as to RF.  Although WiFi obviously operates over a radio frequency (RF), it can be confusing to label WiFi as RF.
There are remotes that operate as RF transmitters but don't use the WiFi protocol.  So, in effect, there are three types of remotes:

Looking forward to the test results...  Good info all.

"Premiere+4630" wrote:
All Streaming Sticks (3500, 3600, 3800, 3810) are RF only, as there is no IR receiver on the devices. Those stick RF remotes are not interchangeable with the RF remotes from the non-stick devices (Premiere, Premiere+, Ultra, etc.), however. So you cannot use a Stick's remote with an Ultra, nor can you use the Ultra's remote with a Stick.

It's strange, I recall having a past Roku Wi-Fi remote which couldn't pair with a (Wi-Fi remote capable) Roku model, though I don't recall which one.

But in recent times I haven't had any problem pairing any enhanced/Wi-Fi remote with any (Wi-Fi remote capable) Roku.  Is it possible that Roku might have arbitrarily restricted some pairing combinations in the past, via the firmware?

Anyways, I like the 2017 enhanced remotes since they have both Wi-Fi Direct and an IR emitter.  The volume and (new) power buttons can now control the TV via auto-programmed IR code (you can still toggle HDMI CEC control if you wish for some reason).  What's more, in my experience these remotes intelligently start broadcasting Roku IR commands out of the box when they haven't been paired via Wi-Fi, or whenever the Wi-Fi Direct connection is temporarily lost (though the IR commands would only work on non-stick Roku models).
0 Kudos
Reply

Per the OP's question:

Express (3900X): comes with basic IR-only remote, and the puck itself does not support enhanced (Wi-Fi) remotes

Streaming Stick (3800X): comes with RC127 slim voice remote (sold separately for $20), and while Sticks don't have an IR receiver, the remote's IR emitter can control Roku boxes such as the Express or Ultra (when the remote has no active Wi-Fi Direct connection)

Streaming Stick+ (3810X): same as above, except comes with RC150 slim voice remote (identical to RC127 except for a channel shortcut button)


EDIT:  When pairing the old Roku 3 with a 2017 enhanced voice remote (RC135), the headphone jack works but pressing volume up/down often changes 2-3 steps at once.  Note also that the new remote does not have motion control (for those old motion-controlled games that were compatible with the Roku 3).
0 Kudos
Reply

Could you try this with the remote from your 4660X Ultra (which is referred to as remote model RC135):

Once that's done, the RC135 remote has a Wi-Fi link to that specific 46** Roku.  As long as that link is active, you should see that the RC135 won't control any other Roku.


Now, unplug the power for that specific 46** Roku, then try the RC135 remote again on the other Roku's.  Once the RC135 lost the Wi-Fi link, it should switch to IR mode to broadcast commands to any Roku within line of sight.  These Roku IR commands should work on your other 46** Roku's as well as the Express+, etc.
0 Kudos
Reply
Trending Discussions
Recent update = Volume buttons not working
Did your Roku remote lose volume and TV control after the latest update? Check here!
If the latest update (v 10.0.0 build 4177-46) breaks controlling TV volume-mute with Roku remote...
Labels