I have my Roku TV set to go to HDMI 1 on boot, but sometimes when I turn my TV on, it shows the transition to HDMI 1, then a weird audio and video glitch occurs where a bunch of scrambled pink and green pixels appear on screen, along with some static-like noise. Pressing home takes me to the home menu like normal, and selecting HDMI 1 fixes the issue. 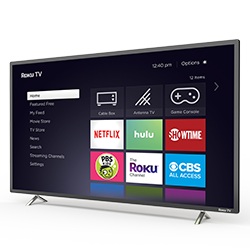 I don't have a Roku TV, so this is pure speculation.

Many tvs start up showing the input they were on when shut down.
Seeing the transition occasionally may be because when you shut down the tv it was set to view something other than HDMI1 so it starts up on a different input and then switches.

When switching to an HDMI input the tv and whatever is connected to that input exchange information so that both can set themselves to connect properly with each other - this is referred to as a handshake. You can get odd results if the handshake fails. When you shut down most tvs they just go into standby mode so they can start up more quickly. My guess is the established handshake for the current input is maintained during standby, so everything starts up right. When it has to immediately switch to a different input, perhaps the tv or the other device isn't ready to perform the handshake so the handshake fails.
0 Kudos
Reply
Related Topics
Weird glitching going on with my Directv service
Trending Discussions
Will not launch channels
Roku Premiere 3920X Media Player AC-3 regression
Prime video not loading
Labels