Thank you for those.   Also - as some other Roku owner/user suggested, I did several restarts on both my Roku boxen which did result in things working normally again (Whew!).  I'm not even going to try to determine the how or why.  I'm just happy that it did.

Good luck all.  Please try this yourself.

Darn, I hope that doesn't happen to us. I just sent my husband up to the camping trailer to get our Roku stick to plug into our two month old TCL Roku TV to see if that would work. If it doesn't, and Roku doesn't get this fixed, I wonder how that works with the TV's warranty? We just bought that shiny new TV, and it was Roku who stopped it from working.

I am still able to watch Youtube on the TV, but that is about the only channel, so maybe the stick will work on mine. Hopefully we aren't going to be stuck with no TV.

We are elderly, and living on Social Security. There is no cable here, and even if there was, we wouldn't have been able to afford it. We have been without a TV since they took away free TV. (We live on an island, and there is a 100 foot hill behind our house, so we can't get any OTA TV).

Anyway, my son was telling us about Roku TV and sticks, so we went to Best Buy. It was during the first wave of Covid, and I have cancer, and was afraid to go to Walmart because of the crowds there. Anyway, the only TVs that Best Buy had for under $300, were a small screen Insignia dumb TV, so we bought that and the Roku stick. We loved having Roku, but the TV was so tiny that we couldn't see it well.  my husband also has hearing problems, so he needs to be able to read close captioning. We have a small older camping trailer we bought years ago, so finally a couple of months ago, we decided to put the dumb TV and Roku stick in the camper, and buy a real 42 inch Roku TV. It was so exciting to have a great big, shiny new TV we could actually use. There is only slow internet where we live, but we could actually watch a lot of the channels, even  though they do buffer some. We bought the Roku TV because we loved the stick so much. We get Netflix for free with our cellphone plan, and they just added a year of Paramount Plus for free. The Netflix worked, but the internet is too slow for Paramount. (Because of the hill behind us, we have to drive down the road to get any cellphone towers, so mirroring from the cellphone isn't an option. At home we use WIFI for the cellphone). Since we are elderly, we watch the free stuff with ads. We love IMDB, because they have a ton of free stuff, and it worked so well for us. Netflix is okay, but there is mostly the popular stuff on there, and we are too old to really enjoy the popular stuff, so we watch the free Youtube and IMDB.

I sure hope we didn't just blow a bunch of money on a beautiful TV we can't use because the company bricked it!

Anyway, I'm hoping the stick will still work, because

Yes. going on day 3 of Roku not working after the update. We have done every trouble shoot possible. It would be nice if Roku would acknowledge there is a problem and tell us when they expect a fix.  Starting to consider other streaming options.

Just another comment - I too am hard of hearing and require aids.  But unfortunately I lost my aids a few months back and they're just too darn expensive to replace anytime soon.  So with the Roku remote I use the included earphones and I can hear to voice perfectly.  Of course, the downside is that no one else watching can hear.  So in the case where your husband watches along, that would be something to try.

Clearly this is a Roku headquarters problem!

Thanks BobMCT - it worked this time for me when I tried again this morning.  I think I was doing it wrong last night, although, this morning the OS10.5 screen was gone.

At any rate, thanks for posting - I might not have kept trying if you hadn’t mentioned the “several restarts.”  I guess this is just like updating a computer or tablet…. wish Roku had mentioned that part.

Happy weekend and thanks.

Yesterday, I had a similar issue after the update....the streaming appeared to just stop while viewing Youtube  TV , with no arrow circle showing.  Had to reset the Roku device and had the same issue.

So I changed Roku device with the spare bedroom one, and postponed the update.  Had the same issue, playback would just stop with no indication of buffering.  Went to bed and found same issue with the unit in our master bedroom.

This morning, I watched Youtube TV on my Roku TV, and had the same issue.

So I watched YouTube TV on my computer and reset the Roku device.  The TV froze again after about 30 to 130 seconds into the program.  The computer did NOT freeze and continued playing the program.  So I continued watching YouTube TV on my computer and left the TV as-is frozen as it was.  Then after about 1 to 2 minutes, the TV started playing again and has been ok since (for the last half-hour so far)!!

So now I'm going to try the same thing with the other Roku devices (I have 3 of them and a Roku TV) to see if they also self-fix themselves!!

I have 3 Roku players in my house. 2 are Roku Ultra and 1 is a Roku streaming stick+ and non of them work on the apps that have always worked, Netflix, Amazon prime, Youtube TV, Disney+, Peacock or even the Roku channel. Some appear to work until a show is selected and then the screen either goes black or just kicks me off of the app. What to do now? 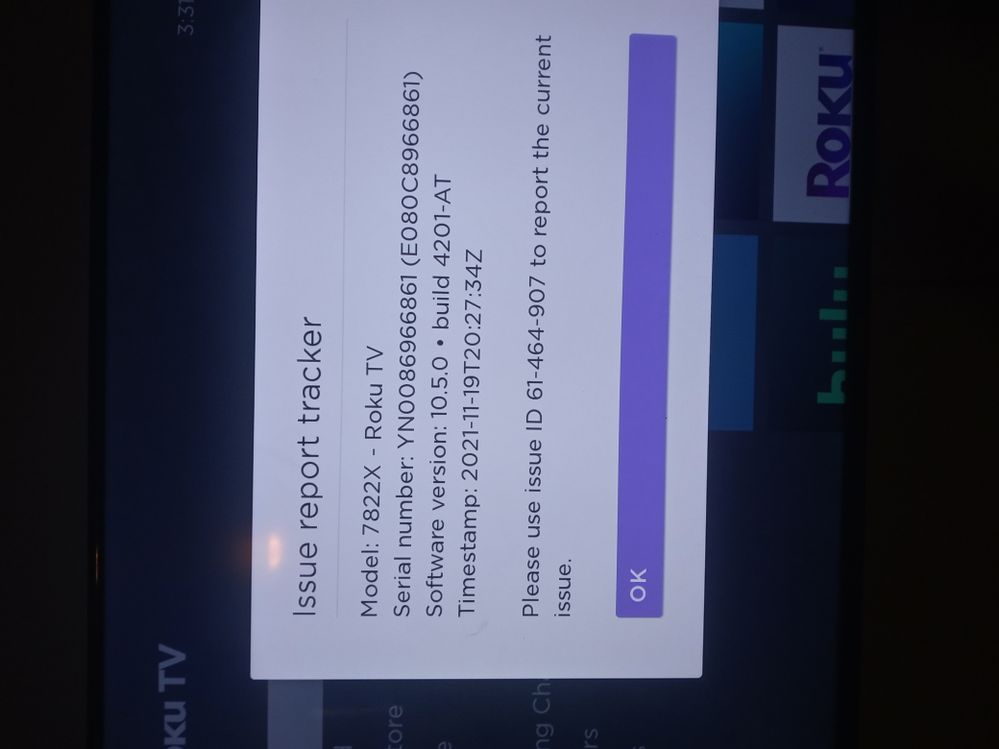 Same! Ever since the update we can not load any channels, even connected to the wifi, restarting, resetting, nothing seems to work anymore. Ive posted a picture of the issue report tracker. Please help fix this, my 50" has become more useless than a painting on our wall!

#1 I didn't know that there was an update like everyone mentions and I don't get the message that have sent a picture of and not being a great tech guy I am not even sure if I am correctly doing these comments/replies. I even got charged $26 for help that I never got from what I thought was Roku support but was apparently not, something called just ask. Now as I just finished typing the above my wife said that she was able to get the Roku's to work on all 3 TV's. Jeesh, what changed?