I purchased a brand new Roku Ultra today.  My picture quality is terrible and I have to deal with buffering.  My internet speed on my laptop is coming in at 110 Mbps on fast.com and my router claims the link rate to the Roku is 130Mbps.  Yet when I test on my Roku it gives me anywhere from 8-18Mbps, regardless whether I'm wireless or connected by LAN.  Is there anything I can do to get something tolerable?

EDIT:  I hate when people have their problem solved and then never post it, leaving me to find they have the same problem as me but no solution.

I had a new modem when I posted this from the internet company.  I called them and they sent me ANOTHER new modem and now I get 50Mbps.  I think it's capped there because I've been checking it for a few weeks and it's always either 49 or 50 with each check.

If your modem/gateway/router/access point has 5Ghz capability, you should connect to that (the 2.4Ghz and 5Ghz SSIDs should be different/separate).

Thanks for the response.  I actually had an old express and bought the Ultra specifically so I could connect to the 5G network, but it's made no difference.

Just to be clear, speeds indicated by the Roku's internal speed test are pretty meaningless (and often way off the mark), especially with wireless connections - what's more important are the bitrates you are seeing internally in apps (if available) such a YT/YTTV, NetFlix, etc.

Check the bitrates using Stats for Nerds enabled in YT/YTTV or with debug/info enabled in NetFlix.

Roku caps the bandwidth at max 12 mbps for all their devices. been asking them for a work around without success. 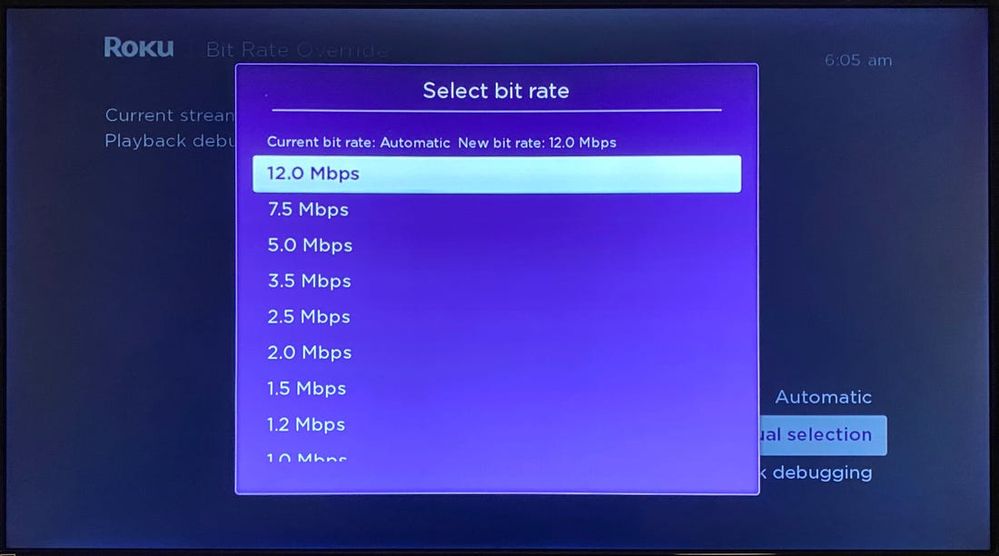 You dont need any more bandwidth to stream Roku.

If you can use Ethernet do it for many reasons. I do.

With your speeds you dont need a MicroSD memory. Yank it out if you do.

Sometimes the Roku's will buffer not often. You can just go out of what your

watching and return. You might need a better DNS server that sometimes helps.

What problems are you having? Its probably fine. But I highly advise using

Ethernet if you can. ookla is probably better for speed checking....

---A problem clearly stated is a problem half solved---.
1 Kudo
Reply

I am using ethernet. With 12mbps cap I cannot stream 4k YouTube content or NAS content to Plex. They are sold as 100mbps devices but with a hidden 12 mbps cap without a overide. Cheap $30 android 4k boxes can stream the above content without a issue vs  $99 ultra!

Oh well so its your own content you want to stream.

I was looking at Plex a while back and they required me to open ports they use so I passed.

Dont scream but really your situation is not what Roku's principally are designed for.

I have tons of content myself on HDD's but I just send it over to my TV on another HDMI cable.

You can get very long ones.

Theres a guy you should talk to @atc98092  he's up on this server stuff you want.

This screen is from one of the hidden menus, and actually no longer does anything. Your Roku is not capped at 12 Mbps. The Roku network speed test has never provided an accurate number in my experience. Even wired, it's reporting my Internet speed at about 60 Mbps, but using a computer my 108 Mbps connection regularly tests as 90+, which is where it should be.

That said, I've never been able to get any of my Roku devices to connect wirelessly faster than the 100 Mbps wired connection that the Ultra has. Using Ethernet, the only playback issues I have with my local media is ripped UHD movies. Those have bitrates that can peak at over 150 Mbps, so much higher than the Fast Ethernet wired connection. But with 1080p or lower resolutions I never have an issue with my local content. I have some test videos that have fixed bitrates for testing, and at 90 Mbps I still get an occasional pause for buffering.

I am aware of at least one person on AVSForums that says he can play his UHD rips on an Ultra via wireless without buffering, but it's never worked for me. Now do I have network issues that are causing slowdowns on my network? Certainly possible, but I haven't been able to track anything down.

While I do have Plex on my media server, I don't use it on my internal network. It's for use when I travel, since the Plex channel on my Roku will connect to it as long as my router is configured correctly. If you have no need for external access, it isn't necessary to open any router ports for Plex or any other media server. For my internal network use, I use Serviio instead, since I have greater control over its transcoding than with Plex. It also allows one movie to play after another, which Plex will not do, and supports PLS and M3U playlist files. On a Roku I use Roku Media Player as the player.

I am not a Roku employee, just another user.
1 Kudo
Reply
Trending Discussions
Scammers infliltrated my connection
No Wi-Fi, no remote, no app
Connect to wifi without remote
Labels