Just posting this to reiterate and solidify what has been stated earlier in the thread.

We purchased the Roku Ultra 2020 and then we bought this IR remote.

We have the Roku hardwired to Ethernet and use HDMI to the TV.

Once you have the IR remote you can totally disable all wireless communications on the Roku including WiFi and Bluetooth.

Now we have a Roku with a great connection without all the wireless comms.

Here's something that's important to remember.

Go to Settings, System, Advanced Settings, Device Connect, and be sure that Disable Device connect is checked.

And I saw a video with someone using an older Roku Ultra where every time the Roku was rebooted or the power had been cut, even though Disable Device Connect was still checked, it was still emitting.

Here's the video that I was talking about, however he's using an older Roku model.

The device connect stays off on mine even when the roku power is off and it reboots.

Yeh it shows the setting of device is disabled but I feel tingling in my head until I disable it again.

I can say that at least with the model I bought this year, from the Roku website, I've noticed it emitting a continuous signal for a minute or so when plugged in. I was curious and checked (with a digital RF meter I use for other measurements) after having it unplugged for a period of time.

I can say that at least with the model I bought this year, from the Roku website, I've noticed it emitting a continuous signal for a minute or so when plugged in. I was curious and checked (with a digital RF meter I use for other measurements) after having it unplugged for a period of time.

For some reason every time I try to reply to this thread with instructions, it gets saved as a draft & doesn't post.

If you feel like giving it a try DM me on here if you're able to.

Is there a way to disable Wifi ?  Not talking about 5G, just in general totally preventing any radio frequency from being emitted from the device .
I have hardwired USB to ethernet connection working and I do not want any microwave frequency in my house.

These TVs are basically giant laptops purely in the sense they have a screen & a Wi-Fi antenna. If you've ever pulled a Wi-Fi antenna from a laptop, almost the same except it's close to 20 more screws instead of four & two clip on wires.

My buddy picked a 43" TCL (model no.TCL 43S423) up thinking it was a good idea being cheap. I popped off the back panel (on this model it's a large plastic "bubble" containing the speakers & inputs), found the offending antenna which turns the ENTIRE metal internal shell into a antenna, hence the 10x RF uptick mentioned by others.

I imagine all models should be similar, but remove the plastic clamshell on the back of the unit, pay attention for one coarse thread screw, the rest are fine thread. The feet must come off too.

CAREFULLY lift the shell as there are speaker & the infared transmitter cables attached to it from the inside.

Locate the pictured chip, the black wire can be snipped right off of the metal inside as the only "board" it is connected to is the antenna. The ribbon cable must be traced to its source, lift the black tab & the cable will come free, don't forget to close the tab. Once these are disconnected, no more transmissions will be sent or received aside from the remote control signal.

After that you can button it back up. Take careful note of what screws go where, 90% are the same but internally there's two separate types. No screws on the trim of the screen should be touched, only the plastic clamshell. Apologies for providing only one pic but I don't want to show a step by step getting people zapped when they work outside of their skill base....nor do I want to keep getting rid of static electricity every time I have to touch the internals after snapping one. Continued below pic..... 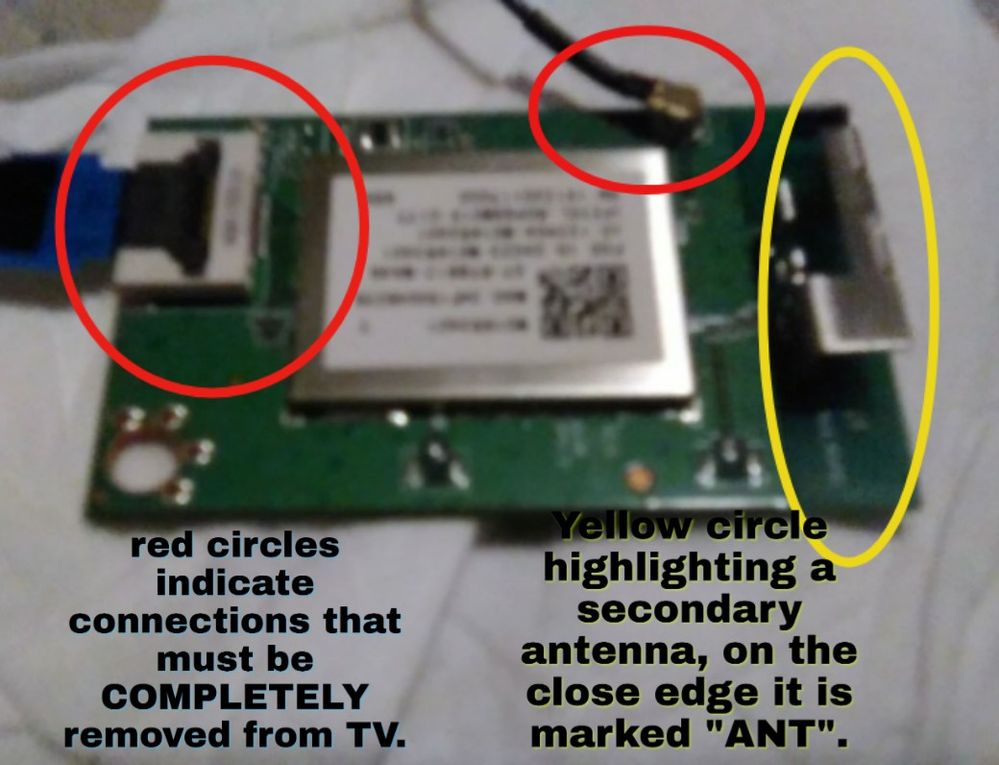 This completely disables any screen mirroring (leave your phones out in the car kids!) & makes two of the gray menu squares lose their icon, thankfully proving it disabled.

If you've never worked with 120v electronics which contain capacitors with enough zap to stop your heart, don't attempt this because you'll be in close proximity to four large ones the size of AA batteries. Either have a TV shop remove it or if you're in the Connecticut area I can do it for cheap.

0 Kudos
Reply
Related Topics
Can't disable ROKU wifi signal
roku model 4200CA can I disable manually the wifi
WIFI DISABLED August 2020
Roku TV is disabling wifi to my laptop??
Trending Discussions
OS 10.5 issues with channels such as Hulu, Prime Video, and BritBox
Can’t connect yet have strong wifi connection.
Is There something going on with rokus connecting to the internet
Labels