No color on Roku Express + with Composite Cable

My TV only has two HDMI ports which are being used by other devices. I do have the place where the composite cables plug into as open, so I decided to use that. The cord has red, yellow, and white. When I tried to plug the cable into the matching color, it did not work. When I try to use the red, blue, and green, (white into blue and yellow into green) I get a picture in black and white and no sound. I am using the composite cable that came with my Roku Express +. 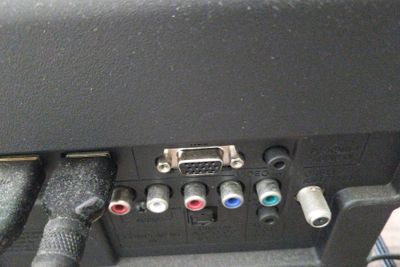 Thank you to anyone who can help.

You are confusing COMPONENT with COMPOSITE -- they are different systems for carrying color video.

The red/white/yellow system from the Express+ is COMPOSITE -- stereo audio on red and white, composite video on yellow.

Your Sony has COMPONENT inputs -- stereo audio on red and white, and a more precise system of video by breaking it into three signals containing the primary color information on three cables, blue, green, and the other red.  Best you can do with composite cables is plug the red and white audio cables into the red and white jacks shown on the left end in your picture, then experiment with which of the remaining jacks gives you the least objectionable monochrome picture from the yellow video cable (probably the green).  You'll be limited to stanard 480i definition in black and white.

If you're really committed to sticking with that old tv, you could buy an HDMI-to-Composite converter and run the HDMI output from the Roku through it and connect the audio and component video cables from the converter to the tv.

Another approach would be to make one of the HDMI inputs on your tv do double duty.  Run two of your HDMI devices into an HDMI switch, and the switch's single output into an HDMI input on the tv.  You can then use the switch to choose which of the two connected HDMI devices will be shown an the tv at any one time.

Some TVs will automatically recognize a composite video signal on the green component input.  You may have confused it by connecting something to the red and blue inputs.  Try connecting the red and white Express+ outputs to the red and white inputs above the AUDIO label and the yellow output to the green input.  Even if it works, you'd probably be happier with true HD by using an HDMI switch.  They can be had for 10 bucks or less like this one.

Like @makaiguy and @renojim said, you’re confusing Y/Pb/Pr inputs with the RCA ones, so I’m 100% sure that you could’ve still had an older TV model that only has RF and RCA inputs and never also Y/Pb/Pr, then you wouldn’t have this issue.

I can help, though:

1. Connect the Yellow cable to the Composite video input of your TV.

2. Connect the White cable to the Left audio input of your TV.

3. Connect the Red cable to the Right audio input of your TV.

These solutions should fix the issue as I think that the Roku Express+ only supports RCA.