I have the TCL Roku tv connected to the Vizio sound bar via optical and I cannot control the volume of the sound bar with the Roku remote.

I have a Hisense Roku TV in another room with same setup that can control the Vizio sound bar that is connected via optical lead to that  Roku tv .

Go into settings of the roku tv and refresh the cec devices.

It says no CEC devices found. I thought and was under the impression that only sound bars connected via HDMI could be seen via CEC. But the Hisense and Vizio combo in the other room is by optical only also, and the Roku remote can control its volume, So a little confusing to be honest.

Yes, you need a hdmi connection for cec. If your only connection is optical, you will need a universal remote that controls roku tv's and soundbars.

The reason your Hisense roku tv remote controls the vizio soundbar is that the vizio responds to vizio tv commands, and it just happens that Hisense uses the same IR code set as vizio tv's do. So the roku remote has vizio tv commands in its database, which for your luck happens to control both hisense roku tv, and vizio soundbar. Its done be IR only, no passing of commands over wires like cec does.

As for universal remote I suggest the One-For-All urc-7935 streamer remote, wiorks great on Roku tv's and controls soundbars. Its a one device remote that can control three different devices, certain area of the remote are dedicated to certain device. Its a learning remote too. You can find them cheap on ebay. 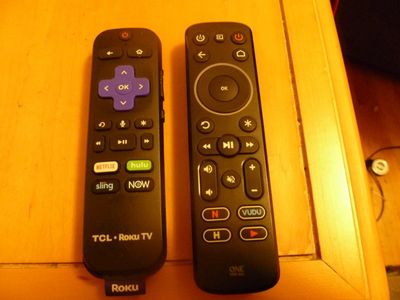 Thanks for the explanation.