Antenna TV guide only works when connected to network. EDITED TO ADD: This is a dealbreaker, I'm out

This last update messed up quite a few things for us. As you already know, the beloved "favorite channels" are gone from being easily accessible. Yes, there is a "recent" list that can be accessed by pressing * while on TV guide but it doesn't seem to update itself. Mine only shows channel 2.1 which I don't even watch on a regular basis.

The new problem I noticed is that the TV guide doesn't even load ANY antenna channels unless TV is connected to the network. I don't have home internet and only connect my TV to my phone's hotspot when I want to get TV guide updated or to watch Netflix.

I reset network connection hoping to force TV guide to just show the channels without any further info - just like my TV did before the update. It didn't solve the problem.

Not showing ANTENNA channels unless you are connected is totally unacceptable. Please roll it back. This new UPdate is more like a DOWNdate.

I'm seriously considering resetting my TV to original factory settings and never ever updating it again. 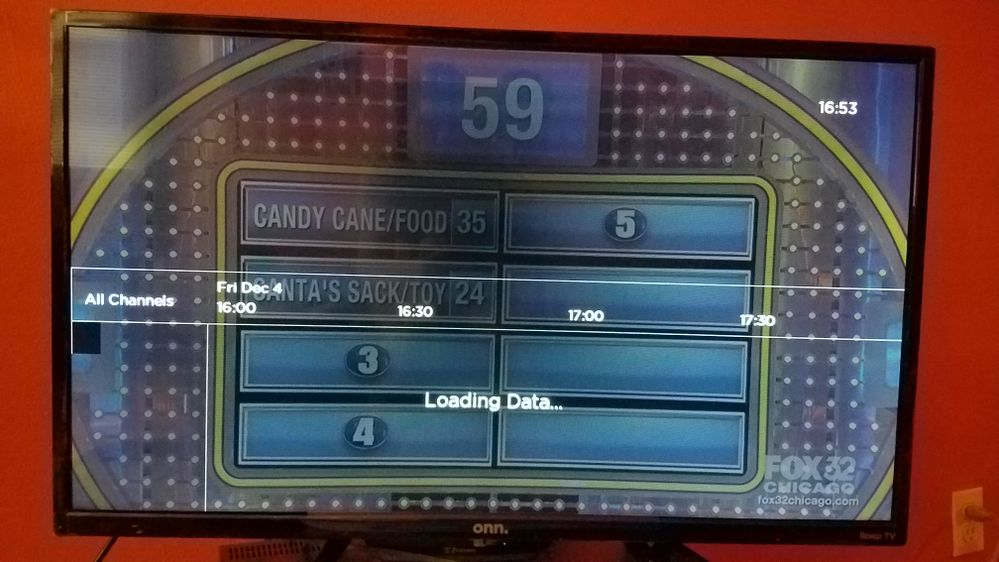 I'm seriously considering resetting my TV to the original factory settings and never ever updating it.

Does that work? I originally thought that would be a solution by reverting back to the version the tv came with. But, I read some things that sounded like a network-less initial setup would require the Roku software to be installed from USB (after downloading it using a code provided by the TV). It sounded like it would still start you off with the latest version, and all you could do is stay there forever (which is too late now. Might have been an option a month or more ago.).

If you're willing to disconnect from the internet, then you're apparently just using your tv for antenna & devices like game consoles (no streaming). If that's true, you can spend around $30 for a "digital tv tuner with HDMI output." These basically look like the old DTV convertors for old analog tvs. But, now they have an HDMI output to connect to digital tv, or dumb monitors. They also have a recording capability. Mediasonic Homeworx looks like a good one (there's a video on youtube demonstrating it). Also ViewTV AT-263. There's quite a few out there. It's hard to tell which one might be better, or have better features. (A universal remote could control both the tv and external antenna tuner.

The external antenna tuners have number-button remotes too. So, having numbered channel access through a universal remote would be a huge improvement over "onesy-daisy, twosy-daisy..." up/down slow channel changing with Roku.

Just an idea. They get guide info from broadcasted info. That's probably a step backwards. In my area the broadcasted guide info is usually not well maintained, especially with smaller broadcasters. I typically rely on online guides (like zap2it or titantv.).

"People are often amazed at how much we’ve done with the number of engineers we’ve got." (Roku CEO Anthony Wood, Austin Statesman, Oct 4, 2019). "Amazed" is one way of putting it.
2 Kudos
Reply

Thank you for your response.

I'm perfectly ok with having a stupid (not smart) TV. In fact, that's what I wanted but I got Roku TV as a gift. In my particular setup I don't even need to buy anything extra to watch over the air channels - I have a very old antenna which (surprisingly) still works well.

When I reset my TV to factory settings (skipping connecting to network)  I got "favorite channels" back. Yay! And these are the channels I can select myself, which I most DEFINITELY prefer to "recent channels" that may or may not populate.

But as soon as I connected to my phone, TV updated itself to the most recent version of its software and I'm back to the problems I absolutely hate. Not only channel list doesn't populate unless TV is connected, but also ANY move drops the channels - if you navigate to the settings and back, or even switch to "recents" and back - the TV guide is empty again, just like in the pic I attached to my original post, and I have to reconnect to my hotspot to get the channel list.

And "recents" just doesn't work for me at all - it just puts channel 2.1 in there no matter what I watched and for how long. No other channels got added to the list ever. Channel 2.1 is just the first on the list but it's not a channel I watch on a regular basis.

I hope Ruku tech support is reading this.

Maybe it's just me, but looking at past threads, I don't get the impression Roku is terribly responsive or (even listening). Depending on how usable your current situation is, it could be better to sell it on craigslist, and buy a not-as-smart tv. Or, spend the $30 on an external tuner.

I get the impression we could be waiting a long time, and they may not even think there's any problem to fix. (I've had the "mute permanently enables captions" problem since last summer.).

BTW: It's good to know a factory reset puts the tv back to the original condition (a usable antenna tv without ever being connected to the internet). I've seen a couple people with relatives/seniors who just watch antenna tv. No streaming. That would be a solution for them. Factory reset & never connect to the internet. Stay on the original software the tv came with.

In fact. If you used a router (not your phone as a hotspot?), you could discover the URL(s) that the update process goes to. Block those in your router. Then you could connect to the internet for streaming without the update carnage. A router's log would probably show the URLs being connected to. A freeware packet sniffer on a computer on the same network as the tv would see it.

I wasn't sure if the factory reset (initial setup) required installation via USB drive (after downloading the software using a computer). It sounds like that's not required, just an alternative way to update. Just never update.

"People are often amazed at how much we’ve done with the number of engineers we’ve got." (Roku CEO Anthony Wood, Austin Statesman, Oct 4, 2019). "Amazed" is one way of putting it.
3 Kudos
Reply

Can you please provide us the following information:
-Roku device model
-serial number
-device ID
-software OS/version
(these can all be found in Settings > System > About)
-tracker ID when this issue occurs (when you see this issue occur, press the Home button 5 times, followed by the Back button 5 times)
-steps to reproduce the issue you are seeing

I attached photos with the asked for info from one of my Roku TV's, I have 3, and all do the same when not connected to internet, the TV/antenna/live channel guide just shows loading data since last update, before it would list all the antenna channels and I could use the channel guide to change channels, now I can't, I live in a rural area and do have outages from ISP, it would be nice to have the previous way it worked added back, thanks 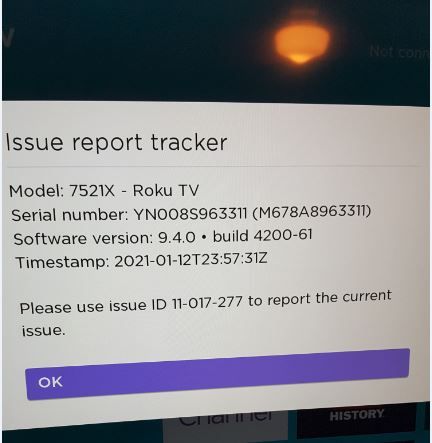 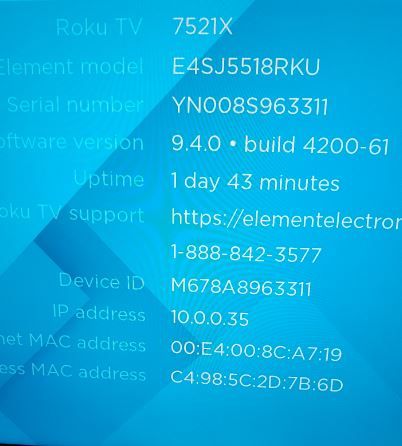 Thanks for the post and providing us with the information requested.

I have passed along your information to the appropriate team to investigate further.

I had the same problem. I can only watch my antenna channels when internet is connected through my phone hotspot. I did a factory reset and that worked. I was able to watch my antenna channels. I updated again and the same thing happened. I did another factory reset. I will leave it this way until there is an update to resolve this issue. I feel like it's a way to force you to use internet to watch tv for some reason.

I feel like it's a way to force you to use internet to watch tv for some reason.

Roku's business model is about driving users to paid content (generating carriage fees, shared advertising revenue). You're not just a customer who bought a tv to watch. You're an "impression" for them to earn money from. (The CEO has said as much, not so directly. But, carriage fees and revenue sharing is a big thing.).

Requiring an internet connection would make you more impressionable. Also, just watching antenna tv is analytics which I'm sure Roku collects and sells. If you're not connected to the net, they can't see even that. They have a motivation to require internet.

I don't mind if Roku has that requirement. I just wish it was more clear when buying these tvs how they would be "difficult." Or, that we could use the last version of software before the terms of service change this way. (I guess that's what I'm getting at. These things seem passive aggressive, or sneaky. Roku doesn't change the ToS to inform us of the new requirements. You just get the update, and figure out that you're no longer cared about. Why not be direct and say "beginning Jan 1, all ...." Let people continue using the old version.

Creating "terms of service" changes through updates (reducing people's ability to use the tv the way it was when they bought it) seems very problematic. Did customers agree to their purchase of a tv knowing it's really a whimsical subscription service with no way to continue using the tv without the subscription? (If it's really that way, and we all agreed to it, then why not have open publication of changes to the ToS? Why be sneaky about it? Changing functionality and letting people wonder if it's intentional or something they should report as a bug (hoping for help, when it's completely planned?).