Movie sequels have a bad reputation as not being as good as the first one.

Did you recently watch a terrible movie sequel?  If so, pls tell us about it in the thread, below.

Non-existent plot.  Most of the nuns are not in this movie.  There is no murder subplot, so all of that danger and excitement is missing.  The best part of the film is the state choir competition for the last 30 minutes.  It has some excitement and some good musical numbers.  But you have to suffer for more than one hour to get to that part.

Watch the first film Sister Act.  It's great!  If you're hungry for more, watch it again.  The sequel is terrible and is to be avoided.  Maybe, just watch the final 30 minutes of Sister Act 2 when they have the state choir competition.

Sharks. Action.  Adventure.  The beginning of the summer blockbuster.

So now a shark might be back, but nobody cares. Chief Brody gets fired for yelling SHARK! but we rarely get to actually see the awesome shark action from the first movie and are subjected to jump scares and some underwater cable low-budget effects with zero effort at making things seem real.

Nothing could live up to Jaws.  It was a crowning achievement in cinema.  Kudos for tying, but the sequels were clearly low-budget money grabs and not real attempts at filmmaking.

@andyross if you have time, can you pls go back and edit your post and use the same format to give others a little more information?

Tim Allen was Santa right from the start of the film, so he started out at the North Pole Toy Factory with the elves right from the beginning of the film.  Tim Allen was good as Santa in the first film, but I think in the second film he was really hitting his groove, better than ever!  And I loved the G-rated psuedo-terror at the North Pole Toy Factory caused by the G-rated "bad" Santa.  I mean the whole film is G-rated and okay for kids but things did get a little "hectic" there for a while.  This film had Christmas "magic", romance, humor and a little bit of action.  At the end, Tim Allen defeats the "bad" Santa, gets the girl and saves Christmas all at once, leaving you feeling positively exilharated.  Gorgeous visuals and plenty of humor keeps it moving throughout.  I think a lot of movie sequels stink, but this one was even better than the first one IMO.  Highly recommended! 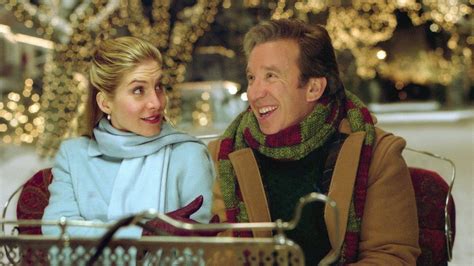