I am looking to cut-the-cord.  I have 4 tv's.  I like the Roku product line.  However, my initial investigation surfaced YouTube as my preferred streaming provider, due to its breadth of channels, and significant DVR capability with "unlimited" recording hours and skip commercial feature.  Relative to viewing, I like the local networks and cable news shows.  With Roku & Youtube not playing nice in the sandbox, it appears that, even if you can get YouTube working over Roku, there may be some feature loss with the work-arounds.

As you might know, YouTube TV is still available within the main YouTube channel. I've never used YTTV, so I have no idea what functionality might have been lost between YT and YTTV apps.

As to other providers, Sling TV is one option. It has DVR functionality and many of the same channels that YTTV offers. Hulu also offers similar functionality. I believe there might be one or two others, but since I don't use them I'm not familiar with them. 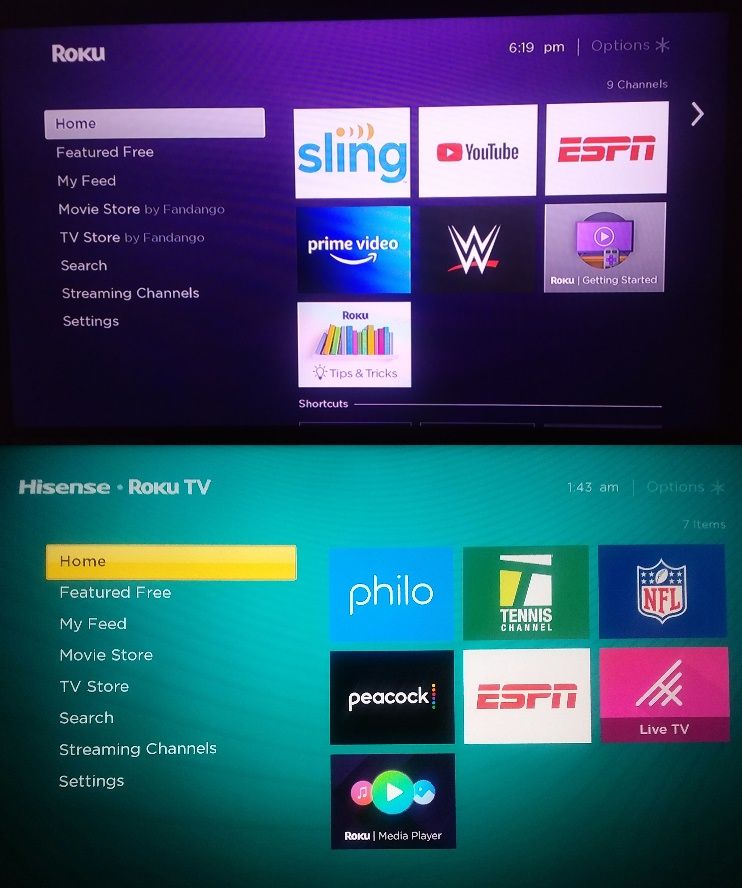 Services like Hulu Live and YTTV may have more channels than smaller apps, but I think it's important to remember that more isn't necessarily better.

In short: I find it best to just use Philo with an antenna and a sports app or two.

Longer version: The screens above show my very first Roku line-up (top) and my current one. My interests are largely the same, I've just found better, less expensive ways to watch.

I'd used Sling to get lifestyle networks and Tennis Channel. Then I realized that the networks I wanted were cheaper on Philo, and the Tennis Channel app is far superior to the standalone channel.

I've downloaded a lot of YT videos to a flash drive, which I watch ad-free via Media Player.

WWE Network has essentially moved to Peacock, though I preferred the standalone app.

Nice thing about streaming is the ability and flexibility to customize your channels/apps around your viewing needs.

Nice thing about streaming is the ability and flexibility to customize your channels/apps around your viewing needs.

Indeed. After two days of streaming, I realized why it was all the rage, and it was hard to imagine ever going back to cable. I love Roku.

0 Kudos
Reply
Related Topics
What are the best free live TV streaming service apps in the United States?
Households Cancel Streaming Services To Cut Costs, Report Says
Best Live TV Streaming Service for Cord-Cutters in 2022
Trending Discussions
Another Nightmare About To Become Reality? HBO Max could be dead, Discovery+ might take over?
Another Way Of Viewing The Streaming Revolution
What's with all the commercial spam?
Labels