Reporting scumbag spammers and mods and admins do nothing.

PM spammer still probably creating 1000 spam PMs a day and ROKU does nothing.

And BTW he was spamming PMs on the same day he made account so that post from ROKU about stopping people from spamming by not letting them spam PMs if they just created an account is BS too. 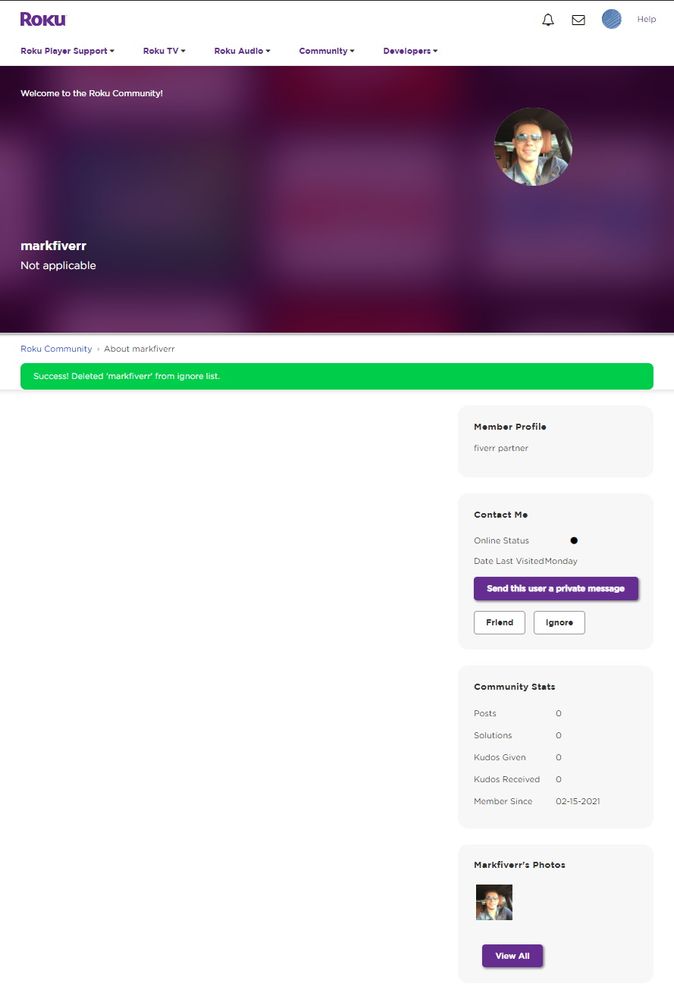 See.. that was bogus. They guy spammed on the same day he created the account! 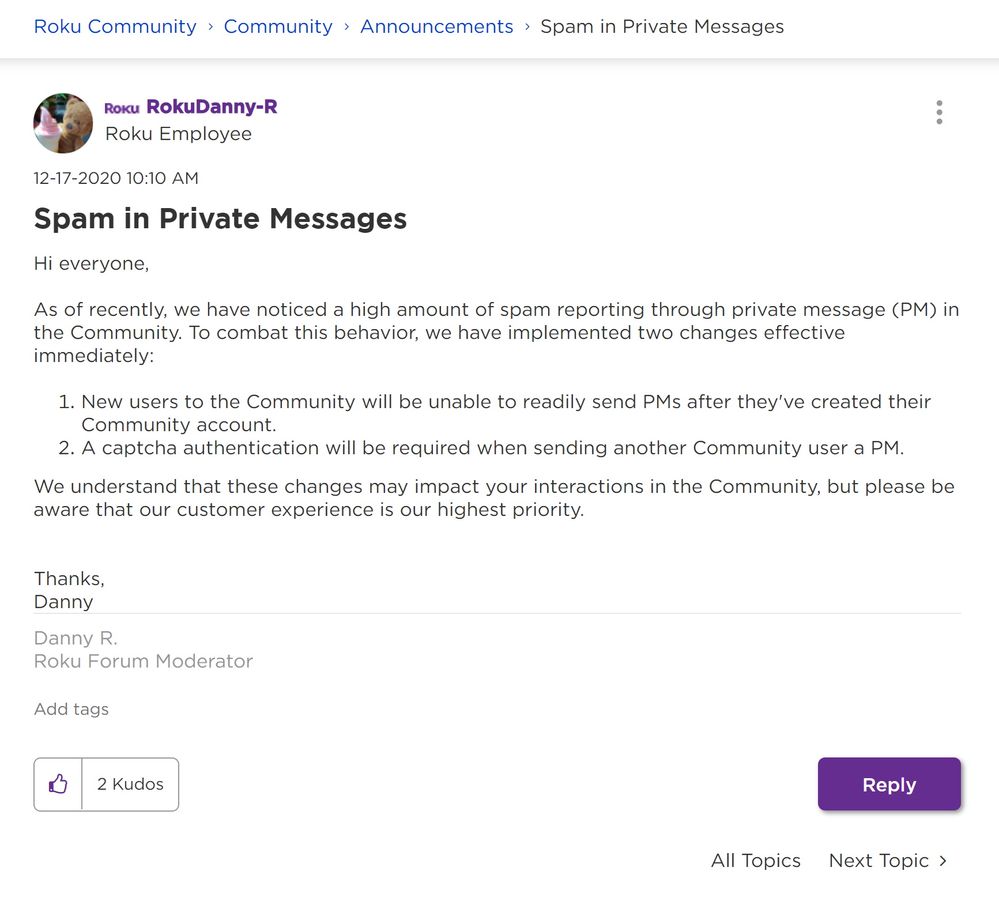 And it's obviously a huge problem here and ROKU are incompetent and won't do anything about it. 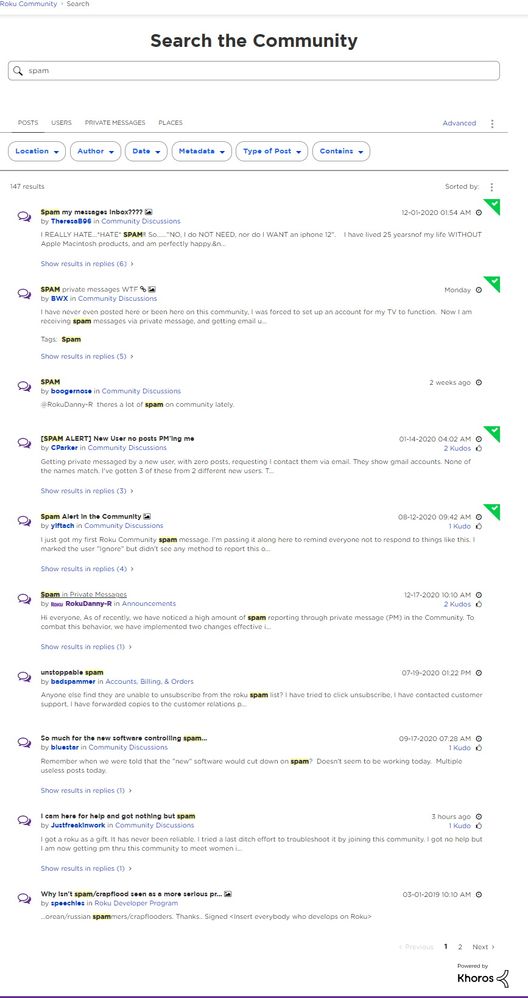 Any other smart remarks trying to defend this forum, the admins, or ROKU on this subject?
No?   Thought not.

I am not a moderator here, but I do mod on two other web forums. In the past few weeks I've seen a huge increase in spam posts. I can delete and ban a user, and within an hour they've posted something else under a new account. It's a cat and mouse game trying to keep up, and this forum is far more public than the ones I assist on. And I know as a mod I can't see private messages sent from one user to another, so there's no way for a mod to watch for those. We have to wait for them to post something public before they can be caught.

"We have to wait for them to post something public before they can be caught."

That makes absolutely no sense whatsoever.

Sounds like a big pile of excuses for Roku allowing and even encouraging spammers.

I bet if I typed in the wrong Politically incorrect word here I would be banned for life, but scum bags can spam people's PM box at will and be reported directly to admins, and admins do NOTHING.

I can't speak to the rules the mods have to follow here. On the forums I mod, I will take action if someone reports it, but we can't access PMs between users. And I don't think the users want mods to be able to view those messages.

You can try to type something non-PC, but I'm pretty sure this forum software blocks any such words. It even blocks some rather innocuous words in its efforts to block the really bad stuff. I suspect that is not controllable at all by the mods. Only the site admins can control that, and more than likely those people are contractors, not Roku employees.

I am in no way condoning any inaction by Roku against the spammers. I'm merely pointing out that in some cases it's not something easy and quick to resolve.

I have received, this week, a spam email indicating PM in my ROKU account.

"You have received a private message in the Roku Community community."

And thus, it seems then that someone has an email list of ROKU subscribers (perhaps due to a breach?)

ROKU NEEDS to provide an SPAM reporting contact protocol in order to review, investigate and correct this problem. Either ROKU membership data has been hacked, or someone inside ROKU services

is allowing this to happen.

The message does not actually exist in the PM section.

That might be because the PMs were mass-deleted after they were reported.  (I also moderate a forum and when we get a new spam account we completely wipe out all of his posts and PMs.)

Thanks for the reply.

I guess, by virtue of the process you describe ROKU admin would have a

way to review and assess the offending spam emails and their suspicious,

Well, whatever they attempted to do did not work.

I posted my one and only question here ever last week because I could not get through to support and now I'm receiving notification spam from "the Roku Community" coming to my e-mail.

Here's a sample. And this is unacceptable.

I left out the link for obvious reasons, but if Roku is going to allow members to be spammed with possible malicious links in messages that the system is forwarded to your e-mail address, they need to read up on their liability. . .
Because, since it is coming from a "roku.com" address they are responsible and I don't think that Roku would want their domain listed as a spammer platform.

I would urge that ROKU establish a phishing-email reporting protocol.

forward an offending spam email to a reporting system.

I don't know, quite frankly, if these systems are effective though.

It does appear in some way that these recent spam messages are from subscribers to ROKU,

or perhaps "fake" subscribers ... I guess anyone can register an account.

I only registered because I subscribed to paid service, and registered a new device.

I’d bet money they will have a data breach or already have. This is some rookie BS. You cannot allow spammers to take over a forum PM and email notification system.