Getting Too-Close-For-Comfort: Wake Up Call Not Only For Roku, Everyone Else Here Too!

“You can't get everything you want, Iona. You are not entitled to it.”

That little quote from one of my own naysayers on this forum really did push me to discuss this particular topic.  If I bought that such a negative thought way back when I was thinking about going to college, I would not have gone and I would not have mostly all of what I wanted in life.  You make choices in life, both good and bad.  So too with a given streamer choice.  Plenty of choices, but easy to get side stepped to the wrong direction.  This also applies to any one corporation’s total divorce from reality.  As in lack of recognizing rapid drop in purchasers/users in such a short period of time.

I would like to introduce you to the tiny daybed-trashing demonstrators of lack of direction: 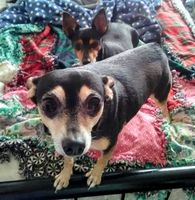 The dog in the front, “Sweetheart,” is the one to be focused on.  The one in the rear is too smart to be so easily misled by tails (or loss of device interest in the streaming world).  For whatever reason in Sweetheart’s little scatterbrained head, she likes to try to catch her own tail.  Round and round she goes, going faster and faster and never catches her tail!  All the while probably getting dizzy in the process.  So too with streamers and her humans.  Around and round you have to go and maybe you will get all of your chosen apps you want in one device for a short time.   Until the next apps blocking/censoring happens and resulting bickering sessions and you’re put off from your once favorite streamer.   Then you fork out some more cash and repeat the cycle yet again.

If you are tired of chasing after tails, how about  keeping on hand at least 2 different streamers from 2 different manufacturers at all times from now on (and you get to keep your already purchased Rokus, too!).  If you can afford it, consider 3.  I unintentionally did so with my Gen 2 Pre-Roku-purchase Chromecast and it allowed me to grant the generously given time to permit/allow Roku to come to it’s senses.  I could not control the outcome (no Peacock TV), but I felt absolutely no guilt when I bought-and will continue to buy-other devices to fill in that crucial gap.  And keep the Rokus I already have too.

Think about it and act before it’s too late (i.e. panic buying, devices out of stock for a long period of time, plus out of money) during these crazy times.

0 Kudos
Reply
Trending Discussions
Has anyone studied/researched Roku and their stock? Why is it performing poorly?
Introducing the Roku Ultra and Roku Voice Remote Pro bundle
How do I get to send more PMs on this forum?
Labels