I've done that and still have the same issue.  Rumble plays but, the display is in widescreen mode and it can not be changed.  My other apps don't have an issue in the screen display.

I'm having this same issue. It began a few weeks ago. Rumble is the only app doing it. I've tried both Rumble and RumbleTV apps. I've removed, restarted, and re-installed several times. Rumble says it's not on their end. If it's not Rumble's doing, then it's Roku's. Either way, it needs to be rectumified, post haste. If this is intentional on the side of Roku, for political reasons, it needs to stop.

See if it happens on different Rumble subscriptions.  It may be on the content provider's side, or your TV's display and video resolution.  I know on some on my Rumble channels, the content stretches past my TV's screens.  Doesn't happen with all of them though.

You can also try casting Rumble to your TV through the Roku and see if you get the same results.  If so, may be a TV resolution issue.

I appreciate your reply. With that said, Roku needs to officially chime in here and explain this.

The problem is Rumble-wide, not a specific channel on Rumble. It exists on both Rumble and RumbleTV apps (doesn't seem to be a difference between the 2 apps in any way).

It just started a few weeks ago, with nothing changing, such as doing updates.

The problem isn't with the TV. As I stated, Rumble is the only app on Roku that does this. And, no other source to my TV does it. My TV isn't a political spin-doctor. And even if it was, it doesn't possess the capability to express bias against one channel, and let others display correctly.

Both Rumble apps are up to date, 6/30/21, according to Roku.
My Roku display settings are set to 4:3, which is appropriate for my TV.

As you can see in the pic below, it only displays the upper left corner of the entire app, not just the video that I select on a specific channel.

The problem actually starts while the app is loading. The "Rumble" logo, which is supposed to be centered, displays "Rumb" on screen, like it's trying to display in 16:9. Once it loads, it only displays my list of channels and about 80% of the left-most episode, regardless of which channel I highlight. I can't see the text under each episode that shows the date, so I have to find it on my computer, and match it to the picture. Once I select an episode to watch, the display actually gets much better. It plays almost the full extent left-right, and only seems to clip off the bottom, so I can't see the slider bar. 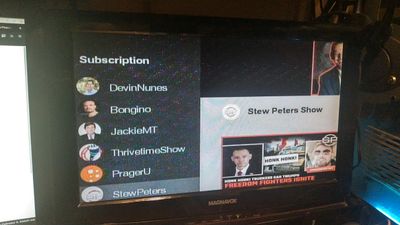 @RokuDanny-RThanks for your suggestion. Do you have any idea how to go about contacting Rumble? Because I can't find any contact or form submission anywhere on their website.

If the issue remains unresolved, I'd recommend reaching out to the channel provider directly to report the issue and request additional support...

Thanks Danny. Once again, I'll ask...
Do you have a known way of contacting Rumble?

Perhaps, per chance, per maybe Roku can contact someone at Rumble, on behalf of their customers, to inquire as to the fix. That way, when they say it's not their fault, but Roku's, Roku would be rigjht there to dispute it, instead of sticking your customer on a carousel that never stops going around. Roku approved their submission to be on the Roku platform. I'm betting there's an email contact somewhere in that process.

I look forward to a correction to this problem, not a brush off. This just shouldn't be this difficult to correct.

I had this happen just now on my rumble app also. Came across this thread just now looking for an answer.

Unfortunately on all the Google searches to find solutions, nothing worked, and mine was on just the rumble app as well. All other channels worked fine. I restarted the roku several times, as well as deleted rumble and re-added, with still not getting it fixed. I ended up choosing factory reset and that worked!!🎉🎊😊😊.

I realize the original poster has figured out their problem by now, but i wanted to post this here so others who have this problem will know how to get it fixed quickly.