I am another who loved the CLOC for the temperature display, wind, etc and the ability to choose the color of the display.  I would pay to have this back @renojim

please fix it . I will pay

I would pay a one time fee for this to have it back but not a sub. please do a one time fee. I'm willing to pay up to $10 to have this back @renojim 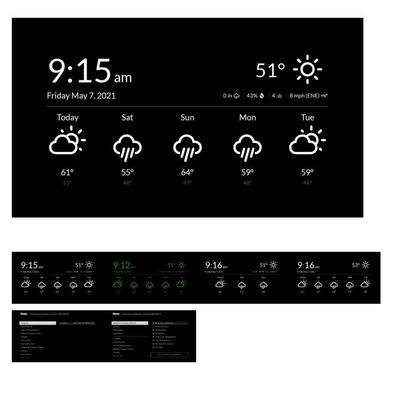 I would request a Alarm clock if you going to charge for it ...

He's calling me every night to see what my cloc is displaying ...

Please get a round to it soon.

Does Dashcoop move/change locations?  Or does it just stay in the same place on the screen?

Dashcoop does move very slightly up, down, left and right.  It does not bounce around the screen like the Cloc screensaver did.  In settings for Dashcoop, under "Animate" I set it to "Enable".

Dashcoop does move very slightly up, down, left and right.  It does not bounce around the screen like the Cloc screensaver did.  In settings for Dashcoop, under "Animate" I set it to "Enable".

Awesome!  Thanks!  I don't need it to move a lot--I just want it to move some so that it isn't in the exact same spot for hours.

I also switched to dashcoop, after CLOCPRI went away was using Clever Clocks but like @mrdctaylor I didn't like the stationary aspect.  I do like dashcoop (not as much as CLOCPRI) but I'm having an odd issue with it.  After about 20 minutes or so, the background of the screensaver lightens to a grey color.  I have done everything I know to do in the Settings, including restoring defaults, but it always goes back to the grey thing after awhile.  It's still usable, and an attractive and informative screensaver.  I've been in contact with the developer (Reid Cooper), he thought maybe I have a power savings thing turned on my tv, but I don't.  I've had CLOC for so many years, with no problems, and I haven't had that happen on any other screensaver (Clever Clocks, etc)

Just wondering if anyone else has had this happen, or any suggestions.

I have also used CLOC  private for many years. I would love to pay for it. Good luck with rewriting it.

0 Kudos
Reply
Trending Discussions
How do I remove LGBTQ stuff from my Kids seeing it?
The Roku Channel crashing to Roku Home screen
Commericals. In Spanish on Roku TV
Labels