I have tried every single suggestion found on the roku community and cannot get Apple TV to play any longer. It worked for one month then stopped. I keep getting a Video Not Available notice. I’ve uninstalled the channel and reset the system multiple times, changed the display settings in both Roku and the TV settings, logged out and back in, checked the internet connection, etc. Nothing will work. Is there anything else I can try?

Thanks for reaching out here in the Community.

Does the issue only occur on Apple TV or across other channels installed on your Roku device? If it only happens on one channel while videos from other channels play fine, contact the channel provider's customer support team to report the issue and get help.

We appreciate your understanding.

All the best,
Kariza

Thanks for reaching out here in the Community.

Does the issue only occur on Apple TV or across other channels installed on your Roku device? If it only happens on one channel while videos from other channels play fine, contact the channel provider's customer support team to report the issue and get help.

We appreciate your understanding.

All the best,
Kariza

Same here. I have a Roku Premiere+ model 4630X. All other channels--Netflix, Hulu, Paramount+, Disney+, etc--working fine, only Apple TV doesn't work. I spent 45 minutes on the phone with Apple, restarting the Roku, deleting the channel and re-installing it, fooled around with audio settings--nothing worked. My TV is an LG Smart TV but I've been using the Roku fine with all the other channels.

Video not available - There's a problem loading this video - MSG

I have been having the Exact Same Problem on any movie I try to watch on Apple TV+ App. through my Roku Device.  I have a paid Apple TV+ subscription and have been trouble shooting this problem of over a week and have tried "Everything"

I have a High speed / High Bandwidth internet connect "Wired" and the Apple TV+ works fine when logged on and watching through my PC. On my Roku, every other paid subscription works like a champ even through I have noticed that it is starting to take up to 15 to 30 seconds to load a new movie and begin watch (HBO MAX and Netflix). A blank screen will appear for the 15 to 30 seconds and then the movie starts.

BUT when logged into the Apple TV+ App, through my Roku Device, I will see the spinning dots for that 15 to 30 seconds and then BLAM! the "Video not available - There's a problem loading this video" MSG will pop up on the screen and I am dead in the water!!!! This is a real set back because the main reason I re-subscribed to Apple TV+ was the watch "Foundation".

Actually, this problem has been going on for several years and over many other devices so it is most definitely an 80% to 90% APPLE Application coding error. I have also noticed that this is never reported on a Apple devices, only on Non-Apple hardware. So the Coding Error is only a problem with non-Apple devices, so it is probably not a priority for them to fix it.

So either ROKU Engineers will have to break the APPLE video streaming code or we are left with the only solution, one which APPLE Wants us to follow. Go out and buy an Apple device,  an Apple TV or iPad etc etc ect.

I would like to hope for the best but I'm not placing any bets on this being fixed any time soon unless Roku get serious and stop blaming internet connectivity problems. Apple will not fix it.

Roku Tech Support "Do you hear me now???" 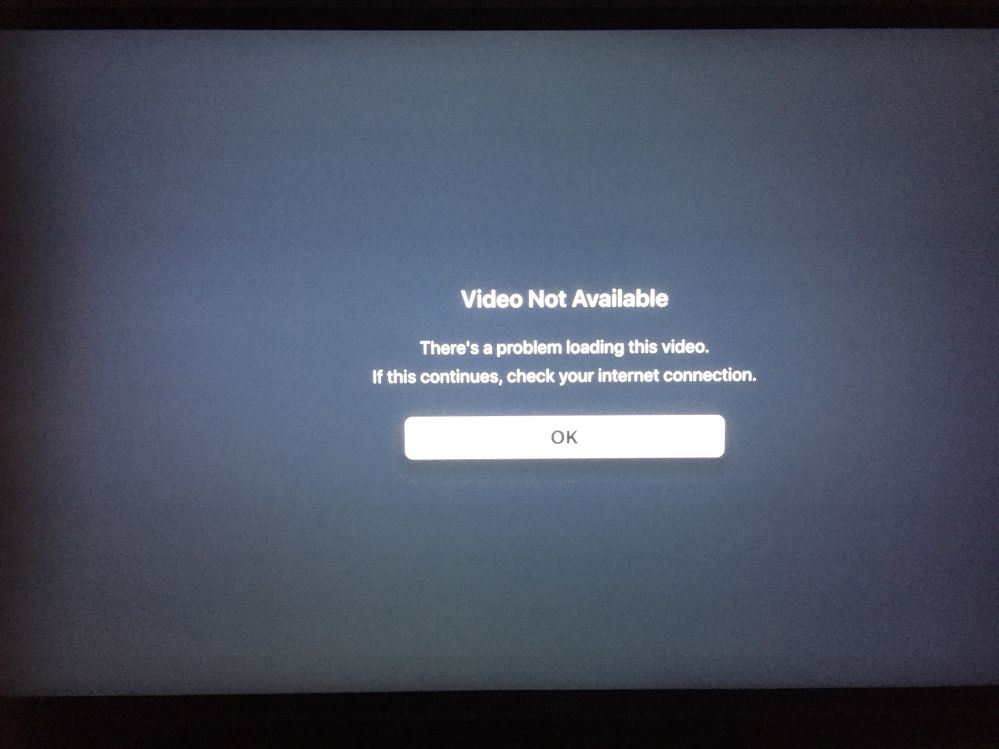 Displayed on the screen

The same thing was happening to us… Ran across a solution somewhere and changed the audio setting on the Roku to Digital Dolby or something like that and it finally started working right after that!
Maybe try changing the Roku audio setting to to Dolby and maybe it’ll work!